Most people don’t know about a group of missionaries who came to America known as Moravians. The Moravian Church was started in Bohemia in the 14oos and suffered great persecution for the first 300 years of its existence. In the 1700s, the Moravian Church experienced a renewal that led to evangelism all over the world.


The renewal started when Count Zinzendorf started a village for refugees from the struggling church in Hernhutt, Germany. The members of the church started praying 24 hours a day in a prayer meeting that would last for over 100 years. Thirty more villages were established, and missionaries were sent out all over the world, including North America. This was the first large scale missionary movement by a Protestant church.


The Moravians’ battle cry was “May the Lamb receive the reward of His suffering.” They didn't only preach this motto, they lived it. Two missionaries sold themselves as slaves to become missionaries to the slaves on the island of Saint Thomas when they were denied access any other way.

They also came to America. Some missionaries settled in Georgia, North Carolina, and Pennsylvania to preach the Gospel to Native Americans. A group of missionaries in Pennsylvania moved to Ohio and set up two villages, Schoenbrunn and Gnadenhutton, to preach the Lenape Indians. They printed the Bible in the Lenape language, and many Lenape, also known as Delaware, joined the villages. These were the first “white” settlements in Ohio.


The Moravians also built the first Ohio school there where boys and girls, white and Lenape were educated. Members of the Lenape were on their village leadership boards and held positions in their church. Equality was preached and practiced.


Moravians brought something else to America besides their missionary zeal. They loved to celebrate Christmas, and many of our Christmas traditions come from the Moravians. My Christmas novella, A Christmas Promise, is about a married couple who lives in Schoenbrunn in 1773 and shows some of these costumes. 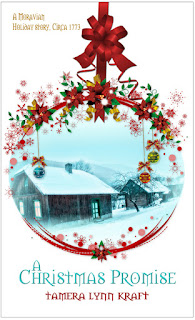 
A Moravian Holiday Story, Circa 1773


During colonial times, John and Anna settle in an Ohio village to become Moravian missionaries to the Lenape. When John is called away to help at another settlement two days before Christmas, he promises he’ll be back by Christmas Day.


When he doesn’t show up, Anna works hard to not fear the worst while she provides her children with a traditional Moravian Christmas.


Through it all, she discovers a Christmas promise that will give her the peace she craves.


Available at these online stores: