A Visit from St. Nicholas

Grab a cup of your favorite “day after Christmas” beverage and join me, Michele Morris, on a journey into the history of the beloved Christmas poem, “‘Twas the Night Before Christmas”.

Clement Clarke Moore wrote the poem, “A Visit from St. Nicholas”, (later know as “‘Twas the Night Before Christmas”) after a shopping trip to the open market in Chelsea, New York. It was a snowy Christmas Eve in 1822, and Mr. Moore intended the poem to be a gift to his wife Eliza, and his children, Margaret 7, Charity 6, Ben 4, Mary 3, Clement Jr. 2, and Emily 8 months old.

Due to Clement Clarke Moore’s position as an academic and religious professor, and his family’s upper-class, social status, he never planned for the whimsical poem to be published. But a year after Moore wrote it, a family friend sent the poem to the New York Sentinel with the condition that the author of “‘Twas the Night Before Christmas” remained anonymous.

The poem's first publication date was December 23rd, 1823, and it was an immediate success. It wasn’t until 1844 that Clement Clarke Moore finally claimed authorship. When, at his children’s prompting, he included it in a book of his poems. (Authorship would later be disputed by the Livingston family . . . but that’s fodder for another blog post!)

Some of Moore’s descriptions of Santa Clause were borrowed from Washington Irving’s writings: A History of New York in 1809, but prior to the creation of Moore’s poem, St. Nicholas, the patron saint of children, had never been connected with a sleigh or reindeer, and for the first time, Santa Clause was depicted as a “right jolly ole elf”. “'Twas the night before Christmas” redefined America’s image of Christmas and Santa Claus.
Four hand-written prints of the poem are known to still exist. Three are in museums, including the New-York Historical Society library. The fourth copy, which Clement Clarke Moore created as a gift to a friend, was sold by one collector to another in December 2006. According to Heritage Auctions, which brokered the private sale, it was purchased for $280,000.

I love that a fanciful children’s poem, written as a personal gift, changed the history of Christmas.

Sometimes it’s the simple things that make the biggest impact.

Do you have a favorite Christmas story or poem? Would you share it in the comments below?

Thank you for joining me today, and I wish you a very merry Christmas, and a happy, safe, and blessed New Year!

“A Visit From Saint Nicholas”


'Twas the night before Christmas, when all thro' the house
Not a creature was stirring, not even a mouse;
The stockings were hung by the chimney with care, 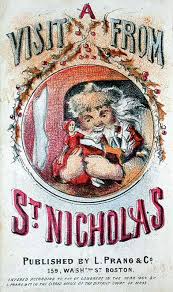 In hopes that St. Nicholas soon would be there;
The children were nestled all snug in their beds,
While visions of sugar plums danc'd in their heads,
And Mama in her 'kerchief, and I in my cap,
Had just settled our brains for a long winter's nap —
When out on the lawn there arose such a clatter,
I sprang from the bed to see what was the matter.
Away to the window I flew like a flash,
Tore open the shutters, and threw up the sash.
The moon on the breast of the new fallen snow,
Gave the luster of mid-day to objects below;
When, what to my wondering eyes should appear,
But a miniature sleigh, and eight tiny reindeer,
With a little old driver, so lively and quick,
I knew in a moment it must be St. Nick.
More rapid than eagles his coursers they came,
And he whistled, and shouted, and call'd them by name:
"Now! Dasher, now! Dancer, now! Prancer and Vixen,
"On! Comet, on! Cupid, on! Donder and Blitzen;
"To the top of the porch! To the top of the wall!
"Now dash away! Dash away! Dash away all!"
As dry leaves that before the wild hurricane fly,
When they meet with an obstacle, mount to the sky;
So up to the house-top the coursers they flew,
With the sleigh full of toys — and St. Nicholas too:
And then in a twinkling, I heard on the roof
The prancing and pawing of each little hoof.
As I drew in my head, and was turning around,
Down the chimney St. Nicholas came with a bound:
He was dress'd all in fur, from his head to his foot,
And his clothes were all tarnish'd with ashes and soot;
A bundle of toys was flung on his back,
And he look'd like a peddler just opening his pack:
His eyes — how they twinkled! His dimples: how merry,
His cheeks were like roses, his nose like a cherry;
His droll little mouth was drawn up like a bow,
And the beard of his chin was as white as the snow;
The stump of a pipe he held tight in his teeth,
And the smoke it encircled his head like a wreath.
He had a broad face, and a little round belly
That shook when he laugh'd, like a bowl full of jelly:
He was chubby and plump, a right jolly old elf,
And I laugh'd when I saw him in spite of myself;
A wink of his eye and a twist of his head
Soon gave me to know I had nothing to dread.
He spoke not a word, but went straight to his work,
And fill'd all the stockings; then turn'd with a jerk,
And laying his finger aside of his nose
And giving a nod, up the chimney he rose.
He sprung to his sleigh, to his team gave a whistle,
And away they all flew, like the down of a thistle:
But I heard him exclaim, ere he drove out of sight —
Happy Christmas to all, and to all a good night.

Michele is an amateur historian/genealogist and writes Historical, Romantic Suspense. She is working on her third novel titled, The Manhattan Solution.