Now, before you gasp and think, "Oh, no, gun control..." just remember this is a research blog where we explore many topics to ensure our stories are as historically accurate as they are enjoyable to read.

That said, let's dig a little into what pistol our frontier heroine could slip in her pocket or reticule to protect herself against the villain or slithery things on the trail.

It's 1849 and our adventurous heroine must conceal carry. What's a girl to do? She may have yards and yards of clothing, but is it suitable for packing heat? She could wear a shoulder holster—a bit unladylike, slip it in her pocket, or put it in her handbag. She could resort to a stocking gun that could be held in a holster in her stocking. If belts were in style, she could have a hand-tooled belt with a hidden derringer. Don't forget boot tops. Winter weather wasn't a deterrent because she could carry it in her muff.


Pocket pistol is an American reference to any small pocket-sized handgun such as a derringer or small caliber revolver. It was common for men to conceal carry in a front or rear trousers pocket, waistband, or in an exterior coat pocket. Less caliber pistols are referred to as mouseguns. 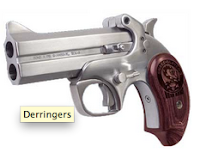 Sadly, the most famous Deringer was fired by John Wilkes Booth to assassinate Abraham Lincoln. The Deringer was popular in the South and in California during the era of the Gold Rush.

Soon gun makers worldwide imitated Deringer's pistol, and misspelled Henry's last name. With the double "r", it became an alternative generic term for any pocket pistol, or palm pistol. Therefore, a derringer is considered the smallest usable handgun of a given caliber.

Our heroine had to keep a cool head, have a snag free place to hide her pistol, and realize she had one shot and it was going to be up close and personal when she fired.

Hopefully, you don't have feel completely dressed unless you are carrying a gun. But, if you were our 1849 heroine, where would you hide your pistol?

Lin and her husband, Jerry, live on a ranch in Chimney Rock, Colorado. She writes historical fiction for adults and children. Her novella The Lye Water Bride is included in the California Gold Rush Romance Collection (Barbour Publishing, 2016).

Posted by Linda Farmer Harris at 12:30 AM