No Christmas for You!

No, I'm not doing a post about the Grinch. I'm actually going to post about a time in history when Christmas was forbidden.

Does anyone have a guess as to when this would have been? Or perhaps to give you a bit of a clue, where the ban on Christmas took place?

Not the United States.
Not England.
Not Austrailia.

I can hear you asking now, "But wasn't France predominantly Catholic back then?" "Don't Catholic countries really like to celebrate Christmas?"

Yes, and yes, to both those questions. But from 1789 until 1799, France experienced a rather bloody and turbulent revolution. I won't go into all the details regarding the relationship of the Catholic Church to the French Government both before and during the revolution, but let's just say that the former French king looked rather fondly on the church, and the church was laden with wealth and property. The average French peasant family was struggling to clothe themselves and store up enough food so they wouldn't starve come winter, while the average priest and nun had stockpiles of food. 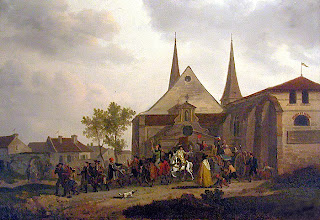 These strained relations between the church and the masses resulted in the Dechristianization of France. The church was slowly stripped of its property and other assets while priests were made to conform to new French laws over Papal ones. The year 1793 saw a dramatic increase in anti-church sentiment. In November, churches were looted, closed for public worship, and converted into storehouses. Public worship was forbidden, as was any displays of the cross or other religious icons. Town and street names were changed so that they reflected no association with religion, (for example any name with the word "saint" in it would have been renamed, like the Rue St. Honore). The calendar was changed so that weeks had 10 days and there was no Sunday. And finally, all religious holidays were banned.

Officially, these policies lasted until Napoleon and the pope signed the Concordat of 1801.

I don't know about you, but I can't imagine explaining to my children "I know we celebrated Christmas last year, but we're not allowed to this year."

I've written two books set during the French Revolution. Sanctuary for a Lady came out in 2012, and The Soldier's Secrets releases in April of 2014. While the books don't have much about the absence of Christmas in them, the loss of religion comes up multiple times in both novels, with everything from the local church being used as a storehouse to the Revolutionary calendar.

Now I'm curious about you. How many of you knew that Christmas was banned during the French Revolution? I'm also curious to know if any of you have ever not celebrated Christmas for one reason or another. Please go ahead and share in the comments below.

Naomi Rawlings is the author of seven historical Christian novels, including the Amazon bestselling Eagle Harbor Series. While she'd love to claim she spends her days huddled in front of her computer vigorously typing, in reality, she spends her time homeschooling, cleaning, picking up, and pretending like her house isn't in a constant state of chaos. She lives with her husband and three children in Michigan's rugged Upper Peninsula, along the southern shore of Lake Superior where they get 200 inches of snow every year, and where people still grow their own vegetables and cut down their own firewood--just like in the historical novels she writes.