On the expansive, cheerful grounds of Bronner’s Christmas Wonderland in Frankenmuth, Michigan, sits a peaceful white chapel, with a domed roof, reminiscent of its Austrian roots. The small building is a 1:1 scale replica of the Silent Night Memorial Chapel in Oberndorf, Austria. The Austrian chapel commemorates the spot where the much beloved Christmas song, “Silent Night” was first sung.

The story has been told that the organ in the Tyrolean parish of St. Nicholas was broken. The assistant priest, Fr. Joseph Mohr, had written a poem which became the song’s lyrics. He asked his friend, the local schoolteacher and organist, Franz Xaver Gruber, to create a tune to go with his words. Gruber composed the music for “Silent Night” on Christmas Eve of 1818. Mohr played the guitar and the two men sang the song together that evening.

Musicians carried the song with them through Europe and eventually to America. The beautiful song has been translated into many languages, possibly more than any other Christmas hymn.

Due to damages from floodwaters, a new St. Nicholas church was built on higher ground in 1906. In 1937, the little Silent Night Chapel was erected and dedicated in commemoration of the origin of the favorite song.

In 1976, Wally Bronner was on a buying trip for his Christmas Wonderland, when he visited the tranquil little Austrian chapel and decided building a replica would be a good way to show his thankfulness to God for the many blessings in his life. Wally had always desired to keep Christ in CHRISTmas with his store filled with Christmas decorations and nativity scenes. The sparkling, cheery environment at Bronner’s has been for many years a delight to the eyes and the heart.
With permission from Oberndorf’s city officials, the Bronners built a replica of the octagonal white chapel. Construction began in 1992 and the dedication took place later that year.

I can only describe visiting the Silent Night Chapel as a reverent experience. The diminutive place of worship inspires quiet meditation and prayer.

Wally Bronner sought to honor God, but also has shared with visitors a piece of history, a place to remember the origins of our beloved Christmas hymn, “Silent Night.” And perhaps, for a minute, give people a touch of what it would have been like to experience the first time it was sung in that Austrian parish nearly 200 years ago.

Merry Christmas! I'm giving away a copy of Christmas Treasures, an inspirational Christmas story anthology, to one lucky commenter! 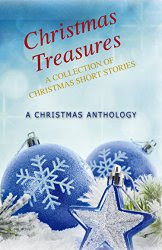 Her debut novel, Rumors and Promises, from Lighthouse Publishing of the Carolinas, is coming out in April, 2016. Christmas Treasures contains Kathleen’s short story, “Special Assignment,” with a touch of humor and the supernatural.