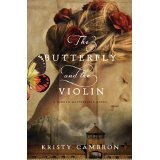 Giveaway  Leave a comment below to enter the drawing for a hard copy of Kristy Cambron's WWII novel, The Butterfly and the Violin. Share on FB and/or Twitter and let me know for an extra entry. Don't forget to leave your e-mail address and let me know if you shared. Giveaway ends 1/3/16 at 9 PM EST.
Posted by Cindy Kay Stewart at 12:30 AM