Last month I wrote about using plaster, sometimes referred to as Plaster of Paris, to make hand prints and life or death masks - http://www.hhhistory.com/2016/01/preserved-in-plaster.html.


French artist Marie Grosholtz Tussaud (1761—1850) was born in Strasbourg, France, and became known for her wax sculptures through the wax museum she founded in London.
Who do you want to meet? Maybe all six of the James Bonds, Kung Fu Panda, the British royal family, William Shakespeare, or Dame Helen Mirren. They'll be at Madame Tussauds museum waiting for you.

My favorites are the Marvel Super Heroes at Madame Tussauds New York (the apostrophe is no longer used). The wax replicas of politicians, celebrities, and historical figures are so realistic that a selfie with sculptures looks in real time.

In January's post I mentioned the process of rubbing oil on the face and inserting straws in the nostrils before applying the plaster to the living faces.

I discovered that Madame Tussaud used the same process make a mold of faces that will later be rendered in wax. Pomade in the hair and oil on the face prevented the plaster from sticking to the living skin.


We often think of wax figures created during the French Revolution as a simple representation of a person's face, but while the bodies were made from wood or leather, they were clothed in the latest fashions. This practice goes back to Dr. Philippe Curtius (1741-1794) when he opened his cabinet de portraits en cire (wax portrait exhibition) in Paris in 1765.

His first exhibition of waxworks was shown in 1770. From the viewers' perspective, the most important detail of his wax models was how they were dressed. Women all over France, England, and neighboring countries visited his Salon to see Marie Antoinette's favorite dress made by her personal stylist, Rose Bertin or Madame du Barry in all her finery. They wanted to see what the fashion cognoscenti were wearing.
Jeanne Bécu, (1743-1793), comtesse du Barry—Madame du Barry, the last mistress of Louis XV, is the oldest waxwork currently on display.
Another fascinating waxwork is Sleeping Beauty. It was sculpted in 1763 by Tussaud and features simulated breathing.
There is disagreement about who modeled for this sculpture. Some say it's Madame du Barry, but she didn't become Louis XV's mistress until 1768. Others believe it's Madame de Pompadour because the costume on the model, which is claimed to be the original, is worn by Madame de Pompadour in a 1759 painting by François Boucher.
In the beginning, Madame Tussaud's mother, Anne-Marie Walder Grosholtz, worked as a housekeeper for Dr. Curtius. He initially created wax models to illustrate anatomy. He also did portraits. He taught young Marie the wax modeling art. Curtius moved his exhibition to the Palais Royal in 1776. In 1782, on Boulevard du Temple, he opened a second exhibit, the Caverne des Grands Voleurs, a precursor to the later chambers of horror.

In 1777, Marie created her first man wax figure—French writer François-Marie Arouet, known by his nom de plume as Voltaire.
From 1780 until the Revolution in 1789, she created many of her most famous portraits including Jean-Jacques Rousseau, Robespierre, George III, and Benjamin Franklin.

When Curtius died in 1794, he willed his vast collection to Marie.  In 1795, she married François Tussaud and had two children.

In 1802, Marie accepted an invitation from Paul Philidor, a magic lantern and phantasmagoria pioneer, to exhibit her collection of portraits alongside his show at the Lyceum Theatre in London. She spent the next 33 years traveling around Europe before establishing a permanent exhibit on the upper floor of the Baker Street Bazaar, London, in 1836. One of her main attractions was the Chamber of Horrors, which included head modeled from Marie Antoinette, Louis XVI, Robespierre, and Maame Lambelle. This exhibit included victims of the French Revolution, murderers, and other criminals. Some of the figures done by Marie herself still exist.

Her self-portrait completed in 1842 is on display at the entrance of the London museum.
It became a family business after her death in 1850. Her sons continued her exhibit, acquired new figures, and passed the business to their sons, who moved the attraction to Marylebone Road in 1884. 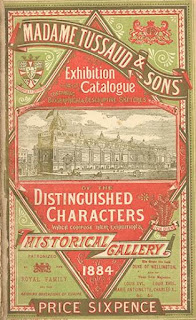 Now owned by Merlin Entertainment Group, the locations, countries and personages have vastly increased. Perhaps, you'd like to reserve the wedding chapel in Las Vegas.
Visit Madame Tussauds official website at https://www.madametussauds.com for locations in America, Asia, Australia, and Europe. Scroll through the different locations to see who's who in wax.


In March 2015, Madame Tussauds asked the American public which tech icon should be the next to be depicted in wax. Steve Wozniak was the choice.

The history - https://www.madametussauds.co.uk/london/en/about/our-history/ and time lines are fascinating. I wish I had the time and space to highlight more about this interesting woman.

Lin and her husband, Jerry, live on a ranch in Chimney Rock, Colorado. She writes historical fiction for adults and children. Her novella The Lye Water Bride is included in the California Gold Rush Romance Collection (Barbour Publishing, August 2016).
Posted by Linda Farmer Harris at 12:00 AM