Amish Dress in the 18th Century

I live in Amish country—to be specific, Elkhart County in northern Indiana, the second largest Amish settlement in the country. Growing up Mennonite with many Amish relatives, and living in this community, has given me a pretty good look into their lives and customs. You might assume that since the Amish cling to tradition, their style of dress has always remained the same, but you’d be mistaken. Just like everyone else, the lifestyle of the Amish has undergone a lot of changes over the centuries, including the way they dress. Just over my lifetime styles have changed noticeably, although it’s happened much more slowly than in the outer culture.

When I started doing research for the Northkill Amish Series, which I’m writing with bestselling author Bob Hostetler, it quickly became obvious that we needed to describe our characters and what they’re wearing. To my dismay I discovered that there’s very little information available about Amish clothing in the eighteenth century, the period during which our series is set. Mennonite Attire through Four Centuries by Melvin Gingerich is the only detailed resource I found on the subject, but although it’s helpful, it doesn’t include much specific information about Amish fashion in the mid-eighteenth century. So I had to make some educated guesses. Happily I chanced across the images of the 18th century Swiss Anabaptist man and woman to the left and below right. The clothes they’re wearing would be very close to what the Amish wore during the same period, except for the stripes on the woman’s apron. They may be Mennonites, who were a bit more fancy in their dress.

One thing I learned was that when the Amish broke away from the Mennonites in Europe at the end of the 17th century, they continued wearing much the same general style of clothing as the common rural people of the Alsace, the Palatinate, and other parts of Europe where they lived. In fact, the dress of Amish women is very similar to examples from the 17th and 18th centuries displayed in Palatine museums. Because of their beliefs, they chose to dress much more plainly and modestly, however, and to adopt little, if anything, from the ever-changing fashion scene. Colors remained very somber, and no adornments such as stripes or figures on the fabric, jewelry, ribbons, and shoe buckles were allowed. Of course, when the Amish emigrated to America they brought their style of clothing with them.

Like the majority of colonial men, Amish men would have worn a long linen shirt that also served as nightwear, a waistcoat, and knee breeches, with long hose and plain shoes as you see above. A dress coat was added for formal occasions such as attendance at church. Once they married, they were required to grow a beard. 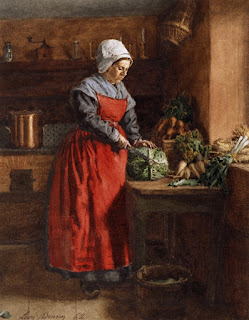 Since women had to cook over open fires and do other labor, they wore a plain mid-calf-length petticoat with a separate bodice that pinned together down the front, and a pinner apron like the one worn by the woman in the painting on the left. Under this they wore a shift that did double duty as a nightgown, hose, and plain shoes. (Colonial women wore stays to support the bosom and back and to provide the right shape for their gowns, but I have no idea whether Amish women did so.) Over their bodice, they wore a Halsduch or neck cloth that covered the neck and bosom, which you can see both in this painting and in Wybrand Hendriks’ portrait of a Dutch milkmaid below right. In cold weather they would wear a shawl. A fitted white or black linen cap called a Haube, similar to the cap the old woman seated at the table in the last painting, by Adriaan de Lelie, wears but lacking a ruffle, covered their hair, which was pinned behind the head in a bun. 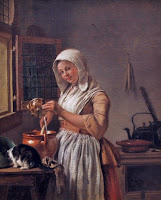 In the summer when they went outside, just like their colonial neighbors Amish women wore wide-brimmed straw hats with low crowns, which they set right atop their cap. These were called scoops because of the shape that resulted from passing a ribbon or cord over the crown and tying it under the chin, thus pulling the brim down over the ears. Amish men and women both wore flat black beaver hats, called in German Flamma deckle, during the cold months, and when needed, they tied the brims down on the sides to keep their ears warm or prevent them from blowing off. 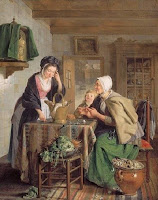 Bonnets came into fashion in the early 19th century, but it wasn’t until the mid 1800s that Amish districts slowly began to allow women to wear them. Gingrich cites examples of Amish mothers who on their deathbeds pleaded with their daughters to promise never to wear this outrageous headgear, but to little effect. Bonnets took over, and today Amish women still wear them. One of my cousins who was raised Amish told me that she absolutely hated wearing the silly things, and she had a good laugh when I told her that they were once banned. How things do change, and perhaps one day the Amish will transition to something else!

Clothing became an important factor in why the Amish clung to the dress styles they brought with them from Europe instead of adopting new fashions as the society around them did. In America the Amish found themselves for the first time conscious that their clothing was distinctly different from their neighbors on the frontiers where they settled—the Scottish-Irish, Huguenot, Quakers, and English. Traditional Amish dress served to immediately identify those who were members of the community. Over time, it also served as a hedge against the pressure to change in ways could eventually cause the Amish community to go out of existence.

J. M. Hochstetler is a descendant of Jacob Hochstetler’s oldest son John. An author, editor, and publisher, she is the daughter of Mennonite farmers and a lifelong student of history. Northkill, Book 1 of the Northkill Amish Series, won ForeWord Magazine’s 2014 INDYFAB Book of the Year Bronze Award for historical fiction. Her American Patriot Series is the only comprehensive historical fiction series on the American Revolution. One Holy Night, a contemporary retelling of the Christmas story, was the Christian Small Publishers 2009 Book of the Year.