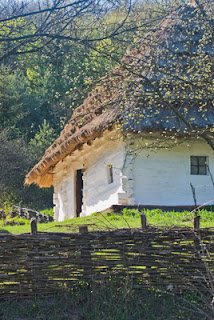 Like many of the HHH bloggers, my blog posts come out of some obscure fact that I need while writing my novels. Today’s blog is no exception. I needed to know a bit about wattle fencing for the latest novella I’m working on. My characters are reclaiming an abandoned town in Kansas and need quick and easy fencing around their garden plots because of the influx of hundreds of rabbits.
Primitive snares to catch the rabbits are another part of this book that I had to research. Hopefully, we’ll get to talk about snares another time.
Anyway, as soon as one of the characters suggested wattle fencing, I had to at least have a working knowledge of the process. But before I get to that, let me tell you what wattle fencing is, and a bit of the history behind it.
Most of us probably associate wattle fencing with medieval times, but it’s still in use in some parts of Europe and other parts of  the world today. Historically, these fences were utilitarian, but there are many instances where they are merely ornamental. It’s a great way to build a fence if the goal is to keep out small animals. And in some cases, the fences can become living hedges capable of turning away larger animals. 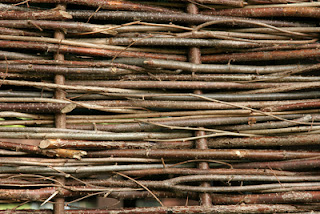 Wattle fencing can be made from a variety of wood, but one of the best options is willow. By using sturdy willow posts about two feet apart, and weaving flexible willow saplings — “suckers” or “withies” — in and out of the posts, gardeners down through the ages have created strong, sturdy blockades to keep rabbits and other small animals out of their food plots.
Depending on the type of animals attacking their gardens, they might have to build a taller fence with sturdier materials. Even if the fence is already completed and is only three to four feet tall, smaller limbs and twigs can be added to the top to form a taller barrier that might turn away a deer.
Now, the cool part about willow fences. Willow tends to take root and suckers will grow up, twining in and out of the fence. All this extra growth might not be aesthetically pleasing to someone who just wants a pretty fence, but I imagine any farmer’s wife who was fortunate enough to have their wattle fence take on a life of its own was happier than a pig in a wallow.
If the posts took root, then maintenance would be so much easier, keeping those unwanted critters out of the precious vegetable garden that had to feed the family for the winter.
Some farmers even took the idea of a small wattle fence a step further and “pollarded” or “coppiced” willow trees so they would have a supply of sucker growth to keep their fences in repair and to construct other willow crafts (as in rocking chairs and baskets).
The best time to build a willow fence is in the springtime when the suckers and new growth are green and supple. It's much harder to work with come summer as my poor characters found out. But even in summer, willow can be soaked to make it more pliable.


There are some amazing examples of woven wattle fences on the internet and I would love to post them here, but don't want to infringe on anyone's copyright. I pinned several here on this Wattle Fencing Pinterest board. Enjoy!

And then I found this video where these ladies made a wattle fence. The end is really cute. Love the moss they added.

All this research (and the video!) has me itching to make a wattle fence. Hmmm, I suppose I need to plant a garden first.

Have you ever seen a wattle fence, or possibly even built one yourself? 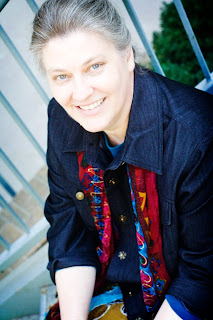