The Real Story Behind the Term "Get Outta Dodge!" 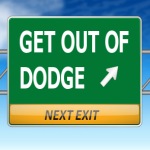 The popular TV show Gunsmoke is credited for the term "Get out of Dodge," but the phrase actually has a more colorful and interesting history.
According to the book Lynchings, Legends and Lawlessness by Loren Avery, the term actually originated in Sidney, Nebraska.  At the time the town had such a bad reputation it was called Sinful Sidney and the Wickedest Town in the West.  Is there small wonder that they buried their dead in what was called the "Bad Man's Cemetery?"
200 murderers, robbers and the ilk were buried there and those were just the ones who got caught.  The numerous hangings included one hapless man who managed somehow to get lynched twice. Sidney created so much news it had three newspapers.
In 1880, a robbery to end all robberies occurred in the town and five million dollars was stolen.  Things were so bad that the Union Pacific railroad threatened to pull out stakes if something wasn't done to curb crime.  In an attempt to clean up the town, a vigilante group rounded up sixteen known criminals and issued a warning to the rest of the lawbreakers telling them to "Get out of Sidney, forever."
Since the edict was issued on April 1st, some outlaws thought it was an April Fools’ day joke.  When the first of the sixteen captives hung from the tree in front of the courthouse the message became clear.
Following the hangings, reportedly over 200 thugs fled town.  Word spread and soon other towns, including Dodge City, used Sidney's crime-ridding blueprint to clear out their own criminals.  Now you know the true story of "Get out of Dodge."

I don't think a sign like that would work today, but some cities are experimenting with all kinds of interesting ideas.  Los Angeles claims to have had success in curbing crime by playing classical music in high-crime areas.  Lancaster, California left crime-fighting to the birds--literally.  Bird chirps were piped over a half mile area and reportedly crime dropped fifteen percent. My town has put up signs saying that we support our police.  It's too soon to tell, but some think that these signs will help lower the crime rate.  What do you think? Any other interesting crime-fighting ideas out there? 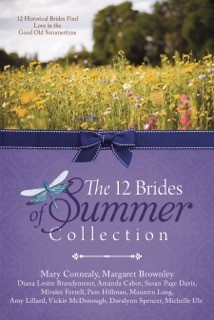 When two people unknowingly
own the same dog, there's bound
to be trouble!