You've Got Mail: A History of the Mailbox with Giveaway! 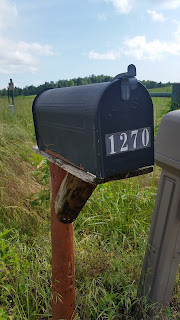 There are a lot of things in our everyday life that we don't even think about, but without them our civilization would be drastically different. One of these is the mailbox. I'd never paid much attention to them, but one day as we were driving along and I was staring out the window trying not to get car sick as we wove in and out of the Missouri Ozarks, my brow quirked. How did mailboxes come about? They're all the same shape and very uniform in most cases. When did that happen?

Before the 1850's, mailboxes didn't exist at all. When you had to go to the post office to purchase postage anyway, there was no need for a mail receptacle anywhere else. But with the invention of the postage stamp, came a need for such a device.

Around 1863, folks in the United States began enjoying Free City Delivery. Letters and mail would be delivered to each doorstep, free of charge. During this time period, you would have the letter carrier knock on your door and wait for you to answer. He'd then hand you your mail with a smile, say a few neighborly words, and be on his way. This worked for quite a while, but eventually the business side of letter delivery won out. Around 1916, efficiency experts estimated that a mailman lost about 1.5 hours every day waiting for patrons to open their doors and receive their mail. That's when the Post Office Department issued an order that every household or business had to have a mailbox or slot to receive mail.

The first form of mailboxes were attached to an outer wall, and this developed as early as the 1880's. But often, doorsteps are far away from the street, and it takes time for a mail carrier to walk back and forth from his vehicle. To reduce the time required, a proposition was made to attach the mail receptacle to fence posts, lamp posts, etc. While this idea was initially rejected in the city, it did catch on in rural areas. This allowed a postman to deliver mail to several farms in a more efficient manner using a horse drawn wagon, or eventually, a motor vehicle. But it wasn't until 1923 that the Post Office Departement mandated a curbside mail reciprocal for every household and business.

Where did the unique shape come from?

Did you know the mailbox shape actually has a name? It's called the Joroleman Mailbox, named after the Post Office employee that designed it. Joroleman had a degree in mechanical engineering. In 1915, he designed a light gauge, painted steel box of a rectangular shape, but with a domed top which prevented rain and snow from accumulating too heavily, would hopefully decrease deformation of the boxes, and decreased mass production time to boot.  His finished design was durable and inexpensive and became increasingly popular.

In 1923, the United States Post Office Department (now known as the USPS) gained the authority to regulate mailbox sizes and designs. This is why your mailbox is stamped with either "U.S. Mail" or "Approved by postmaster."

And what about the little red flag? Joroleman had that on his design as well. Originally it was used not just to alert the postman of outgoing mail, but also for the postman to indicate to the patron that he had delivered the mail. A real convenience in nasty weather.

There you have it, a summary of the history of the mailbox. AND since today is the release day of my new book, DAWN OF LIBERTY, I'm going to give you the chance to have a new book delivered to yours! Leave a comment to get your name in the drawing for an autographed paperback copy. (US addresses only.)

Amber Schamel writes riveting stories that bring HIStory to Life. Visit her at www.AmberSchamel.com, or subscribe to her Newsletter.
Posted by Amber Schamel at 12:00 AM