I fell in love with dinosaurs at Dinosaur Valley State Park on the Paluxy River in Glen Rose, Texas when I was 32 years old. I thought dinosaurs were a boy thing and we had a 10 year old daughter. During the summers, we visited state parks for their historical value within a hundred mile radius of our home in Austin. Jerry taught eighth grade history and these excursions augmented his lessons.
Back then you could walk in the creek and put your foot in the tracks embedded in the limestone. 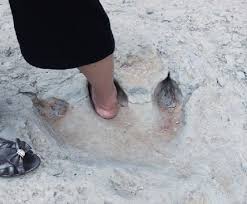 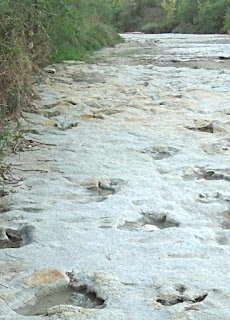 Fascinated, I learned along with Amanda about the theropod and sauropod tracks and saw the models of an Apatosaurus - meaning deceptive lizard (70 feet) and Tyrannosaurus (45 feet). I enjoyed the prehistoric stories and reading the controversies about man walking among the dinosaurs. Yes, I had heard of  Triceratops, Stegosaurus, and the T-Rex, but now they were more than facts on a page.

As their collection and exhibits grew over the next two decades so did my enjoyment. I was still the proverbial "Kid in the candy shop." The movie Jurassic Park I & II are still fun to watch even with some of its wobbly paleontology.

Then Jerry and I retired and moved to Colorado. My days of Texas dinosaurs came to an end.

Colorado took the reins and guided me to the Rocky Mountain Dinosaur Resource Center (RMDRC), west of Colorado Springs. The colorful, life-sized dinosaur statues of the Das[pletosaurus and Styracosaurus are awesome.


Even through they're skeletons now, the Anzu wyliei, edmontosaurus annectens, Pachycephalosaurus, and the T-Rex once walked the Midwestern and Western United States. Some of the skeletons at the RMDRC were built from the actual fossilized bones, while others were molds cast from fossilized bones.

As if dinosaurs weren't enough, I moved on the prehistoric fish like the Xiphactinue audax.


These fossils were recovered in 1952 from Gove County, Kansas by George F. Sternberg (1883-1969). They are on display at the Sternberg Museum of Natural History in Hays, Kansas. It's estimated that they are "probably the most photographed fossil specimen in the world."

Other places in Colorado to visit dinosaurs. Websites after the cities.


Dinosaur Journey Museum—Fruita—Dinosaur Journey
This museum is devoted to hands-on experiences with robotic displays of the stegosaurus, triceratops and T-rex.

Dinosaur Ridge—Morrison—dinoridge.org
The Discovery Center features bones of the Stegosaurus and the Apatosaurus, plus the Backyard Bones Dinosaur Dig.

Denver Museum of Nature and Science—Denver—www.dmns.org
Visit Dinosaur Gulch in the Discovery Zone

For more Colorado places and links go to http://www.colorado.com/articles/where-see-dinosaurs-colorado

Read Amy Higgins's interesting article "A Gig You Can Dig" in the Colorado Country Life Magazine.
Science Buzz's article on The Science of Ichnology, a specialized branch of paleontology that studies the trace fossils of prehistoric creatures, offers information about a couple of recent discoveries. Plus the author traces previous finds. Reports of new prehistoric tracks from Montana could be a rare footprint of a Tyrannosaurus rex. In New Brunswick, Canada the discovery involves some 315 million year-old reptile tracks.

In 2012, Science on NBC News called Colorado the Dinosaur Freeway after more than 350 "newly" discovered tracks made by various dinosaurs, crocodiles and pterosaurs were found. The Dinosaur Freeway goes from Boulder, Northeast Colorado, to Tucumcari in east central New Mexico.

On our first trip to Glen Rose I found a print-embedded small rock. The pathways to the outdoor exhibits had been graded before the park opened for the season. This marvelous little rock was cast into the grass on the shoulder. The director let me keep the rock because it was palm-sized.
Maybe I'm a paleontologist at heart and just now finding that out.

Do you have an interest that stayed hidden for a long time or a hobby that's recently emerged? Do you live near a dinosaur park?

Join us on Tuesday, August 2 at 8PM - 10PM (CDT) for the Release Party of The California Gold Rush Romance Collection. We'll be giving away a Kindle Fire and a beautiful necklace as a grand prize, hear behind-the-scenes stories from some of the authors, and more. 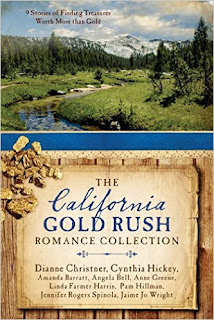 Lin and her husband, Jerry, live on a hay and cattle ranch in Chimney Rock, Archuleta County, Colorado. Alas, no dinosaur remains have been found on our 129 acres.