Michele Morris here, and one of my favorite ways to spend a rainy afternoon is to brew a cup of hot peppermint tea, then curl up with an afghan in my favorite chair, and binge-watch old movies. Not the Technicolor or colorized kind, but good old fashioned grainy, sepia colored films, and the more singing and dancing—the better!

Some of my favorites are WW2 era USO stories. The iconic actors and actresses always prove entertaining. While over the years the real-life USO has enlisted a host of volunteer Hollywood favorites, there is so much more history to the organization than the live shows. 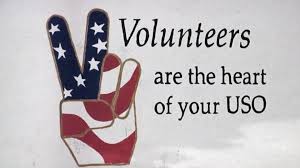 The USO is not part of the federal government but is a Congressional chartered,


private organization that relies on the contributions of organizations, corporations, and individuals for support and it is powered a “family” of volunteers and paid staff.

During World War II, G.I.s called the USO their "home away from home." A place they could go for a friendly smile. The USO was one of the many ways in which our nation came together to support the war effort and US soldiers.

Started a tradition of entertaining US troops that still continues, the USO 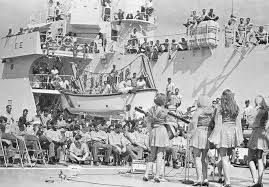 became predominantly famous for its live performances called Camp Shows. Through which, the entertainment industry helped boost the morale of its servicemen and women. Hollywood, in general, was eager to show its patriotism, and many well-known stars joined the lines of USO performers. They entertained at military bases, at home, and overseas, sometimes placing their lives in danger, by traveling or performing under hazardous conditions.

In 1947, the USO was disbanded. Then in 1950, it was revived for the Korean War, after which it also provided peacetime services. During the Vietnam War, USOs were sometimes located in combat zones and volunteers even visited troops on the front lines. 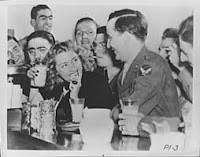 I came across a list of USO entertainers who performed for the USO from 1941 to 1947 at wikipedia.org/wiki/United_Service_Organizations.com that I thought was interesting. It’s just a snapshot of the great men and women who have supported our troops. 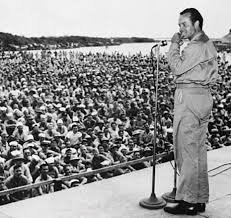 Wow! This list is inspiring! And think how many more people have been involved since 1947. As a matter of fact, there have been approximately 1.5 million volunteers, and it is estimated that 35 million soldiers have been entertained or served in some other capacity.

The next time you watch an old USO movie on classic TV, remember the volunteers who provide the US troops with a “home away from home.”

Thank you for stopping by Heroes, Heroines, and History today!