The hero in my current work in progress is in jail and needs to escape.  The question is how?  As usual, whenever I have a plotting problem I hit the books.  From my research I learned that escaping jail was no big deal in the Old West.
There was a good reason for this. Jails were often built in a hurry and were flimsy affairs.  Adding to the problem, towns didn’t have the money to hire jail guards.  One California jail was so poorly built that prisoners were put on their honor not to escape.
The way prisoners escaped varied and, in some cases, was even laughable.
Arroyo Grande’s wooden jail house was the object of scorn, and breaking out was somewhat of a town joke. On several occasions prisoners skipped town taking along the iron chains that were meant to hold them captive.
Dynamite was used on occasion, but was seldom necessary.  Some prisoners simply walked out of unlocked cells. Others, like a man in a Yuma jail, wiggled the bars loose in a window. 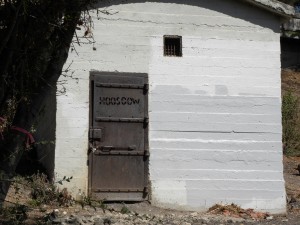 Roy Bean (yes, that Roy Bean) supposedly escaped a San Diego hoosegow by using a jackknife to cut through soft mortar.  Bean went from escapee to the colorful judge known as The Law West of the Pecos.
Ten men escaped the Tombstone jail while the guards were having supper.  They simply dug a hole in the wall and jumped fifteen feet to the ground.
Billy the Kid escaped from the Silver City prison through a chimney.
San Francisco's first jail was a flimsy log structure built around 1846.  John Henry Brown, editor of the California Star, wrote in ACTUAL EXPERIENCE OF AN EYE-WITNESS, FROM 1845 TO 1850:
“One night a man, by name of Pete, from Oregon, was put in the Calaboose, for having cut the hair off the tails of five horses and shaved the stumps. As Leavensworth (the Alcalde) did not send him his breakfast, he called on Leavensworth at his office, with the door of the Calaboose on his back, and told him if his breakfast was not sent up in half an hour we would take French leave. Leavensworth sent his breakfast.” 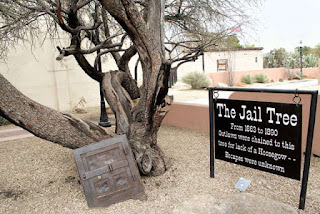 Wickenburg, Arizona didn’t have a jailhouse.  Instead, prisoners were chained to a large Mesquite tree until they could be transported out of town.  No one ever escaped the tree.  However, so many prisoners were once chained to the boughs, there was no room for more. Out of necessity one criminal was tied to a nearby log.  He got sick of waiting, so he picked up the log and walked to the nearest saloon.
Men weren’t the only ones who broke out of jail.  Women, however, were more likely to use feminine wiles than brawn.  After stagecoach robber Pearl
Hart escaped Sheriff Wakefield’s supposedly secure jail, she boasted “he fell in love with me.”
Jailbreaks were so prevalent that New Mexico governor Lionel Sheldon declared that “escapes are as easily made as from a paper bandbox.”
Not all escapes were successful and some escapees were either shot dead or caught a few days later. But many did manage to get away.  Out of those who were caught, some managed to escape again and again. 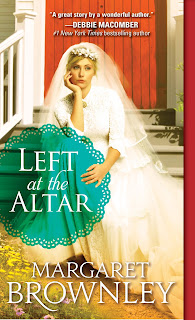