Historical fiction authors spend a lot of time reading real history. Many years ago, I was reading an 1880s newspapers at the Nebraska State Archives when a news story literally stopped me in my tracks. It was a true mail order bride story.

The German Club of Grand Island, Nebraska, had decided there weren't enough German women in the area. Together, they came up with a unique solution. Pooling their funds, they sent "home" to Germany for women. Forty came. The ladies stepped off the train and into a local social hall. Couples paired off and got married. They had to spend their first night in town so that if any of the ladies changed their minds, the marriages could be annulled the next morning. And then they went home.

After my initial astonishment at this real "mail order bride" story, my storyteller's imagination began to race, wondering about the whys and wherefores--and the what ifs. After all, Germany is a relatively temperate climate compared to Nebraska. And forested. Western Nebraska knows huge temperature extremes (over 100 in the summer and wind chills of 60 below in the winter are not unusual). As for trees, in the late 1800s there weren't many in the entire expanse of plains.

What would that have been like? Married to a stranger in a very strange land.

At the time I came across this true story, I'd also been immersing myself in the Solomon Butcher collection of pioneer photographs. When Butcher's homesteading efforts in Custer County, Nebraska, weren't successful, he came up with the idea of producing a photographic history of the county. His father provided a wagon and a team (pictured at right).
Butcher loaded up his photographic equipment, and set out on a journey that would result in thousands of glass plates and one of the richest historical archives in the country. (See the collection here: https://www.loc.gov/photos/?fa=contributor%3Asolomon+d.+butcher%7Cpartof%3Abutcher%2C+solomon+d.+%28solomon+devore%29%2C+1856-1927&all=true)

It would have taken Butcher hours to reach some of the homes and families he photographed. He supported himself with a subscriptions, donations, and the sale of photographs to his subject families. In addition to taking photographs, Butcher collected stories. His history of Custer County (Solomon D. Butcher's Pioneer History of Custer County and Short Sketches of Early Days in Nebraska) is replete with first hand accounts of events. One of Butcher's real stories inspired a dramatic scene in my mail order bride story, Karyn's Memory Box, wherein the hero, Mikal, falls into a deep well.

Tempted to think of sod house life as bleak, I've been drawn to photographs like this one at right--a prairie mansion built by the Haumonts, immigrants from Belgium. This house inspired a best friend named Celest Delhomme for my mail order bride Karyn Ritter.

Perusing the Butcher collection, I've wondered about those women. And about the women who came to Grand Island, Nebraska from Germany and married strangers. I hope there were many happy endings among them.

Why do you think we're so fascinated with stories about mail order brides? 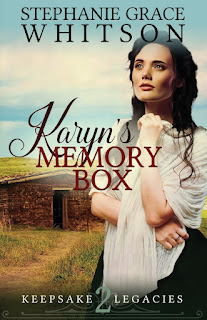 Stephanie Whitson's mail order bride story, Karyn's Memory Box has recently been re-released in both trade paperback and ebook formats. It will soon be available as an audible book as well. Karyn's Memory Box is Book 2 in the Keepsake Legacies series.