A Ghost Town that Lives On, by Marilyn Turk

Seeing a ghost town was on my bucket list, but I didn’t realize I’d be checking that off on our visit to my brother and sister-in-law in Nampa, Idaho. I’m from the southern United States, and my knowledge of the West is woefully limited, so I thought all ghost towns were in California, New Mexico or Arizona. But I was in for a great surprise.

What interesting history I discovered! First of all, the name “Owyhee” is pronounced like Hawaii (silent H). Thinking the name was of Native American origin, I was amazed to find out that the name came from 1819, when three natives from Hawaii were part of a fur-trapping expedition sent to trap a stream that emptied into the Snake River. When they did not return, the expedition’s leader went back to check on them, found one man murdered and the other two missing.  He named the stream in their honor, using the word “Owyhee,” which was an early spelling for the word Hawaii.

As our road got bumpier, we bounced around the single lane while I feared meeting a car coming the other direction, seeing no room for passing unless one of us was precariously close to the edge that dropped off the side. Later, when I discovered that Silver City was a stop on the stage coach line in the late 1800’s, I sympathized with those who had to travel the same roads in such an uncomfortable vehicle. 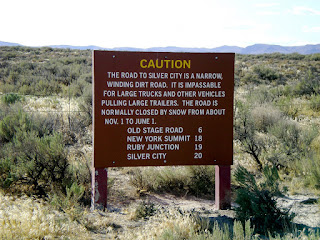 Finally we arrived at Silver City and the sign at the entrance telling visitors to respect the historic, privately-owned property. There was also a sign noting the population: in the summer, between 50-100, in the harsh winter, 2 (who are caretakers of the town).

Silver City was founded in 1864 soon after silver was discovered at nearby War Eagle Mountain. The settlement grew quickly and was soon considered one of the major cities in Idaho Territory. The first daily newspaper and telegraph office in Idaho Territory were established in Silver City. The town was also among the first places in Idaho to receive electricity and telephone service.

In its heyday, from about 1860 to the late 1880s, as many as 2500 people called the settlement home. The town contained 300 homes and 75 businesses. At its mining peak, the Silver City Range boasted more than sixty mills processing ore, with an estimated production of at least sixty million dollars, in gold and silver, retrieved from over 100 area mines.

Today, Silver City has about 70 standing buildings, all of which are privately owned. Many of the owners are third or fourth generation descendants of the original miners. There is no longer any electricity, but the owners use generators or solar power to supply their needs during their return in the summer months.

One of the best ghost towns in the country, Silver City has kept its character thanks to property owners committed to its preservation. Due to its historic designation, no new buildings are allowed, but maintenance such as painting and repairing continues to preserve the original buildings. With a little imagination, a visitor can visualize how the town looked at the turn of the 19th century when it was a bustling county seat full of people, horses and stagecoaches.

The 1866 Idaho Hotel closed in 1942, but was reopened in 1972 and still provides guest rooms and the only restaurant in town.


Across the street at Pat's What Not Shop, one of the two other businesses open in Silver City, I found the most interesting book. Tales of Silver City was written by a Alta Grete Chadwick, a woman who was born in the town in 1895 and lived until 1972. For a history lover like myself, this collection of stories about life during the early 1900s in a western mining town is fascinating.


Other public buildings still standing are the school which now houses a museum on its second floor, and the 1869 Masonic Lodge, which is still used for town meetings, and the 1898 church. 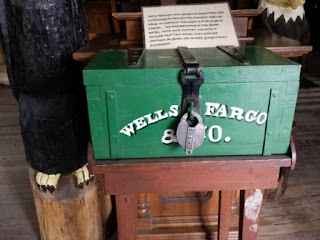 A walk down the road leads you to a couple of cemeteries where tombstones disclose more about the resilient people who lived in the town. 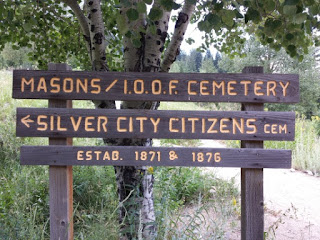 Have you ever been to a ghost town? I highly recommend a visit to Silver City if you have a ghost town on your bucket list.

Marilyn Turk loves to study history, especially that of lighthouses and the coast of the United States. Her newest book, Rebel Light, is set in Florida during the Civil War. She is the author of A Gilded Curse, a historical suspense novel set om Jekyll Island, Georgia, in 1942, and Lighthouse Devotions - 52 Inspiring Lighthouse Stories, based on her popular lighthouse blog. (@ http://pathwayheart.com) To find out more about Marilyn’s new releases, sign up for her newsletter at marilynturk@pathwayheart.com. You can also find her on Facebook and Twitter.