The Estate at Stourhead 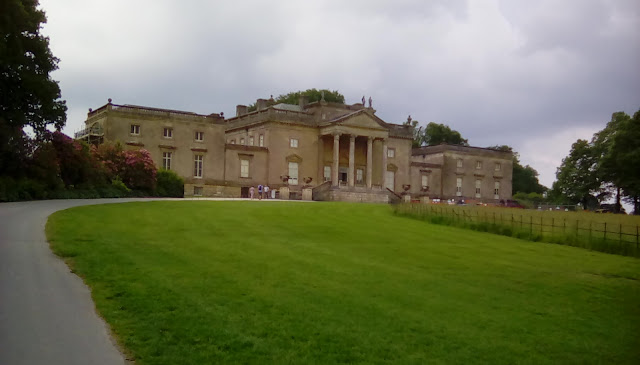 When I was blessed with an opportunity to visit my niece for a week in England, I had high hopes of visiting Highclere Castle, the real life setting of Downton Abbey, but distance and time did not permit this. I asked my niece if we could visit an estate which had belonged to nobility and so she took me to Stourhead!

Indeed, visiting the grounds and Palladian-style mansion (based on the ideas of Venetian architect, Andrea Palladio) and very spacious grounds makes a visitor feel as though they’ve entered the production site of a BBC period drama. The Palladian bridge and Temple of Apollo are actually seen in the 2005 movie, Pride and Prejudice, and the gardens were used in the 1975 Academy award winning movie, Barry Lyndon.

Henry Hoare I, the son of wealthy banker, Richard Hoare, who’d been knighted in 1702 by Queen Anne, bought the Stourhead estate, which had been in the family of the Barons of Stourton for over 500 years, in 1717. The old manor house was demolished to make way for the new, which was completed in 1725 after four years, and designed by Colen Campbell, a Scottish architect. Sadly, Henry Hoare I died the same year the house was completed, but it was passed onto his son, Henry Hoare II.


Henry II, successful in his own right, furnished the Palladian mansion with beautiful artwork. He was also instrumental in the design of the classical gardens around a lake. The path around the lake is supposed to recreate the different stages of Aeneas’s visit to the underworld, a mythological tale found in the Aeneid. This includes a Pantheon, a temple of Apollo (added later), and a grotto with a statue of a nymph.

Yet, there is nothing that seems it’s from the underworld in this beautiful place. The gardens were also created to provide a lively, colorful landscape, evoking images in paintings. The gardens and buildings were a status symbol for the inhabitants of Stourhead, proclaiming their wealth.

Henry II’s grandson, Sir Richard Colt Hoare, added both the picture gallery and Regency library, which are both a feast for the eyes, and the temple of Apollo in the garden as well. Succeeding heirs made changes and additions over more than a century.

Then late in the 19th century, Sir Henry Hugh Arthur Hoare took over Stourhead after his uncle left. He and his wife, Lady Alda Hoare, devoted themselves to the restoration and care of Stouhead, preserving it for their son, Harry. They even endured further repairs after a fire in 1902. 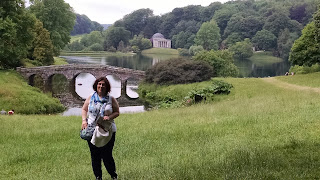 Sadly, Harry died in battle during World War I in 1917. Sir Henry and Lady Alda were the last residents of Stourhead and the estate was given over to the National Trust in 1947. To this day, Stourhead the historic estate and gardens, in Mere, Wiltshire, England, truly remains a national treasure, preserving the elegance of days gone by.

Kathleen Rouser (above, by the lake at Stourhead) has loved making up stories since she was a little girl and wanted to be a writer before she could even read. She desires to create characters who resonate with readers and realize the need for a transforming Savior in their everyday lives. She is a long time member in good standing of ACFW and a former board member of its Great Lakes Chapter. Kathleen has been published in anthologies, including the Amazon bestseller, Christmas Treasures, as well as in both print and online magazines. Her debut full-length novel, Rumors and Promises, was recently published by Heritage Beacon Fiction in April, 2016.

Previously a home-school mom of three, she has more recently been a college student and a mild-mannered dental assistant. Along with her sassy tail-less cat, she lives in Michigan with her hero and husband of nearly 35 years, who not only listens to her stories, but also cooks for her.