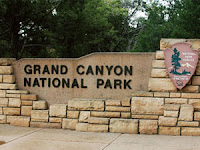 Last month, I shared some of the amazing history of Grand Canyon National Park, which I learned on my summer road trip to the park. This month, I thought I’d share about The Grand Canyon Railway. It provides a great way to see an absolutely awe-inspiring piece of nature and one of our national treasures.

After the end of the Civil War, more and more people traveled to the West, but the journey was long and difficult. It became somewhat easier when, in May of 1869, the Transcontinental Railroad was complete. In the decades after this milestone, railway lines began to crisscross the vast western states and territories, and a main line eventually connected Chicago, Illinois to Las Angeles, California, passing through a little place called Williams, Arizona. Williams is a mere 64 miles from the South Rim of Grand Canyon, and there was a rail line that turned north from Williams toward the iconic landmark. The Anita mines also sat about 45 miles north of Williams.

In the late 1800’s, Buckey O’Neill, sheriff of Yavapai County, saw that there was a need for a rail line
from Williams up to the mines in order to make it easier to move the heavy ore. He went to New York and got the support of the investment firm, Lombard, Goode, and Company, which in turn began negotiations with the Santa Fe Pacific Railroad to build a train line north of the town. To sweeten the deal, O’Neill and the investment firm talked up the awesome beauty and possibilities for tourism of the Canyon. O’Neill also courted local investors for the project, and by 1897, the Santa Fe and Grand Canyon Railroad Company was born. Construction of the new line began immediately and was completed in 1901, with the first passengers traveling to Grand Canyon via the train on September 17, 1901.

The Santa Fe Railroad put much effort into developing the South Rim into a wonderful mecca for visitors. Employing the services of a female designer by the name of Mary Elizabeth Jane Colter, they built several iconic hotels and lodges which are still in use today. In addition, they hired the Fred Harvey company to manage the hotels and restaurants to make the visitors’ experiences top notch.

But as so often happens, time marched on. Automobiles became more accessible for American families. With the opening of Route 66 in November 1926, people found an easy and scenic way to travel the country. Road trips grew in popularity, which had a very negative effect on train travel. Eventually, the Santa Fe Railroad was forced to make a difficult decision. Since so many travelers were choosing their own vehicles rather than the rails, the company stopped providing rail service to Grand Canyon in 1968.

You’d think that this was a very sad ending to a piece of American history, but there’s good news. Eighty-eight years to the day after the first passenger train carried visitors to the national park, The Grand Canyon Railway made another “first trip.” Entrepreneurs Max and Thelma Biegert realized that this important piece of history was about to disappear completely when a company began pulling up the tracks to salvage the materials. In a last-minute decision, the Biegerts bought the Grand Canyon Railway, stopped the salvage attempts, and declared that the railroad would once again provide passenger service to the South Rim. They rebuilt the tracks, restored the train engine and cars, and reopened for business on September 17, 1989, twenty-one years after their last trip.

Today, the train makes daily trips to and from the Canyon. You can catch the train at the original Williams depot, which sits beside the stylish Grand Canyon Railway Hotel. To add to its historic charm, they provide a short Old West reenactment before you board the train for your two-hour ride into the park. Some of the period characters come along to provide musical entertainment for the journey. It truly is worth the time to experience this little piece of Americana. 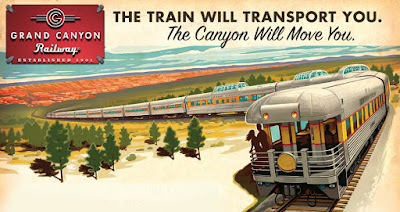