A Siberian Miracle & A Giveaway


How did 1940’s prisoners in the Siberian labor camps survive serious illness? And how did they escape to tell their stories?

Mietek Rymaszewski wasn’t old enough to fight when the Germans and Soviets overran Poland in 1939, but that didn’t prevent the Soviets from imprisoning and sending him to slave in the gulags of northern Siberia. Mietek's story represents hundreds of thousands who took the same journey but didn’t survive to tell about it.

Today’s feature begins almost one year after Mietek’s capture in Poland. His previous adventures were shared in these earlier posts:  “A Young Man’s WWII Survival Story,” and “Survival in Siberia – A Young Man’s Continuing Saga.”

One morning after a heavy snowfall in late December, Mietek strode to his worksite in the frigid Siberian temperatures and worked up a sweat. Finding a hole that had been chiseled in the ice of a nearby river, he drew a cup of water and drank from it. A nasty chill resulted, and by the end of the day, a 102°F fever gripped him. On December 31st, Mietek was taken to the hospital, a deep dugout located outside the prison camp. At first he was delirious, but soon he lost consciousness.

Sometime later, Mietek awakened but couldn’t lift his head. After drifting off, he woke again and asked how long he had been at the hospital. The doctor pointed to a calendar tacked to a post. The day was February 5th. He’d been unconscious for thirty-six days! Lena, a nurse and also a prisoner, brought bread, dipped it in tea, and fed Mietek by hand. She had kept him alive in the same way all the weeks he was unconscious.

Mietek gradually gained strength and helped the nurses by carrying food to the other patients. Later when the doctor examined him, the doctor told Mietek he was all right but just needed food. To help solve the problem, the doctor hired Mietek to keep a fire going in his dugout at night. When the doctor came in, he shared food brought from the kitchen with Mietek.

On May 11th Mietek was escorted back to camp and returned to work the next day - cutting firewood for locomotives. A nasty blizzard struck and left a case of frostbite on Mietek's face. The male sickroom nurse provided him with a mixture of surgical spirit and glycerin, and his skin began to heal after a few weeks.

Mietek and his fellow prisoners moved on to build an embankment to support bridge timbers for a rail line spanning a deep river. Next, they relocated to a camp on the River Pechora where they pulled timber out of the river, cut it, and rolled it to a small sawmill to be cut for railway sleepers. Here Mietek saw eskimos and reindeer for the first time.

Many young Russians lived in this camp, and some of them stole whatever they wanted or took the items by force. One Russian demanded Mietek’s soup, so he quickly drank it and rammed the bowl in the Russian’s mouth, causing his mouth to bleed. The same fellow approached Mietek as he was lying down that night, so Mietek struck him a few times with a stick, and the Russian walked off holding his ribs. The fellow didn’t bother Mietek again.

After the ice on the Ust Usa River melted, the prisoners sailed up the river on barges and crossed the Arctic Circle. They passed an area where many human bones protruded from the melting snow. Some of the Russians thought these were the remains of eight hundred slaves who’d been trapped by an Arctic storm while they were marching on foot to Vorkuta (an area where prisoners slaved in the uranium mines). It was thought that the whole convoy had frozen except for the escort commander who’d escaped with a pack of dogs. Since Mietek and his fellow prisoners were heading to the same place, he expected the Soviets to force them to work the mines until the radiation finished them off. Meanwhile, the men in his convoy continued to die from malnutrition.

But . . . another miracle transpired.

Before arriving in Vorkuta, an official boarded and pulled all the prisoners from Poland off the barges. Because Germany had invaded Russia, the Soviets were joining the Allies in their fight against the Germans and had agreed to release all Polish citizens held in the Soviet Union. They released Polish POW General Anders from prison to immediately gather and train a Polish Army in the east to aid the Allied fight.


The story of Mietek’s adventures will continue next month – his escape from the Soviet Union another exploit in the life of an extraordinary young man. 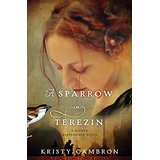 Giveaway:  Leave a comment below to enter the drawing for a hard copy of Kristy Cambron's WWII novel, A Sparrow in Terezin. Share on social media and let me know for an extra entry. Don't forget to leave your e-mail address and tell me if you shared. Giveaway ends Thursday, 11/3/16, at 9 PM EST.