The 3 Most Intense Presidential Elections in U.S. History with Giveaway

With the 2016 Presidential Election just around the corner, and with us Americans holding our breath to hear the outcome, I thought this would be a good time to walk the aisles of electoral history. Today we're exploring three of the most intense elections in American history.


At this early point in American history, political parties were just shaping up. The Electoral vote was a bit different then too. The candidate who claimed second place would end up as Vice President. Can you imagine if that were yet the case today? Well, 1800 was the election that changed that.

This one was a race between three men. Thomas Jefferson, his chosen V.P. Aaron Burr, and incumbent President John Adams. The contest waged between Jefferson and Adams, both of them slinging angry, nasty accusations at each other - and even their wives.

The surprise was that it wasn't Jefferson and Adams who had the close race, but Jefferson and Burr. The Democratic-Republican candidate was tied at 73 votes with the man he intended to be his V.P. For the first time in U.S. history, (and it's only happened twice) the election went to the House of Representatives.

After 7 tense days, the House elected Jefferson as President, with Burr as his vice. They also added the 12th Amendment that caused the President and Vice President to be chosen separately. No more runner-up complications.

1860 - The Election that tore the nation apart. 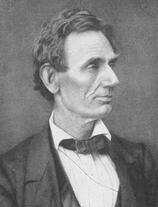 By 1860, the rift between the north and south was palpable. The Republican party was only 10 years old, and Abraham Lincoln had won the nomination. Besides him, there were three other candidates that were well in the running. Stephen Douglas and John C. Breckenridge both ran as Democrats. Douglas was popular in Norther states and Breckenridge in Southern. John Bell also ran, calling his party the Constitutional Union. He was also a Southern States delegate.

With the vote so divided, Lincoln easily won the Northern states, and the Southern states lost the election to a man whose name had not even appeared on their ballot. The result was soon evident.

Lincoln's victory was declared on November 6th. By the 10th of November, the legislators of South Carolina were holding a council regarding secession. By December 20th, the secession was official.


1876 - The Controversial End to the Reconstruction

Talk about tense...this one was a doozy. Almost sparking a second civil war.

The Republican Candidate Rutherford Hayes ran against Democratic Samuel Tilden. At first, it seemed that Tilden would win out when considering the popular vote. Tilden had 4,300,590, while Hayes fell behind him at 4,036,298. But it was yet too close to call. Tilden's 184 electoral votes was one vote short of the 185 majority it would take to win. Meanwhile, his opponent was at 165, 20 votes away from victory.

The catch was that there were exactly that many votes yet undecided.

First was the trouble in Oregon. Hayes had clearly won the state, except one electoral vote that went to Tilden. After much dispute and the replacement of the elector, the last Oregon vote went to Hayes.

Meanwhile, both Democrats and Republicans had declared their candidates to have won South Carolina, Florida, and Louisiana. Each party accused the other of fraud. The tension mounted until it threatened to return the nation to civil war.

The decision was taking far too long. Inauguration night was nearing, and still, no one knew which man to swear into office. In an effort to resolve the issue, Congress appointed an Electoral Commission. However, the checkmate between Republican and Democrat was just as strong among the chosen committee.

Finally, in February and behind closed doors at the Wormley Hotel, the deadlock was broken. The Southern Democrats would accept Hayes victory...with conditions. Among those conditions was a mandate that all Federal troops would leave the South, thus ending the Reconstruction.

*****
What is the most intense election that you have witnessed?
Leave a comment below to be entered in a drawing to win Dawn of Liberty - a collection of short stories about Samuel Adams and the Declaration of Independence!

Author of over half a dozen books, Amber Schamel writes riveting stories that bring HIStory to life. She has a passion for travel, history, books and her Savior. This combination results in what her readers call "historical fiction at its finest".  She lives in Colorado and spends half her time volunteering in the Ozarks. Visit her online at www.AmberSchamel.com.

Download a FREE story by subscribing to her Newsletter!
Posted by Amber Schamel at 12:10 AM