This is the third and final post in my series on the Moravian missionaries to the Native Americans during the 18th and early 19th centuries. These men and women were saints of sturdy faith, indeed, and they suffered many trials in their devotion to spreading the gospel of Jesus Christ. Like all humans, they also had flaws, as we’d expect. When he was only a youth, the subject of today’s post, John Heckewelder, went to the Muskingum River in Ohio in the spring of 1762 as Christian Frederick Post’s assistant in his mission to the Delaware Indians in the Ohio Territory. Like John Mark, the young man who accompanied Paul and Silas on their first missionary journey only to turn back when the going got tough, Heckewelder fled that fall when the Indians became increasingly hostile toward the Whites. At the end of the year, however, with the conflict known as Pontiac’s War looming, threats against Post’s life finally forced him to flee as well.

Heckewelder spent the rest of his life as a missionary among the Delaware at a crucial period of their history, while they were progressively being driven from their lands in Pennsylvania into Ohio, and eventually to Ontario. His book, History, Manners, and Customs of the Indian Nations, which published in 1818, is a classic work that offers readers and historians insights into the history and lives of the Delaware even today. I own a copy of it myself and am using it to do research for my historical series.

Heckewelder was born in England in 1743. His parents were German Moravians, and in 1754 they moved their family to Bethlehem, Pennsylvania, the headquarters of the Moravian Church in North America. Young Heckewelder grew up among fellow believers who ministered to the Delaware living along the Susquehanna and Allegheny rivers. Heckewelder’s parents apprenticed him to a cooper as a boy, but in 1762 he accompanied Post on his journey into the Ohio Territory as his assistant. Under Post’s guidance and later that of David Zeisberger, Heckewelder lived among the Delaware Indians throughout the 1760s and 1770s, becoming fluent in their language and intimately acquainted with their culture.

After the French and Indian War, the colonists in Pennsylvania were hostile toward all Indians because of the devastating raids they had suffered. English settlers and soldiers also continued to move into the lands west of the Allegheny Mountains claimed by the Indians, pushing the original inhabitants ever farther west. In the early 1760s a Delaware prophet named Neolin came to prominence. He told of a vision in which the Master of Life had commanded him to call the Indians to abandon the ways of the Whites and cast them out of the Ohio lands, which he had given to them. Only then would they gain the blessing of the Master of Life, and he would restore their power and prosperity. In 1763, under the influence of this teaching, many of the tribes renewed their attacks against the English, led by the Ottawa leader Pontiac and the Seneca leader Guyasuta in a war that came to be known as Pontiac’s War. The Moravian missionaries and their Indian converts, who like the Quakers and Amish were nonresistant, found themselves under suspicion—and often attack—by both the English and the Indians.

The American Revolution made their situation even worse. Although the Moravians remained neutral, the Americans suspected them of aiding the British because they would not fight on their side. At the same time the British accused Heckewelder and Zeisberger of treason, claiming they passed intelligence from the Indians to the American rebels. The two missionaries were arrested and hauled in front of British officers at Detroit and held there for months. Meanwhile, a group of soldiers in Pennsylvania’s militia brutally murdered 96 unarmed Indian converts, including women and children, at the village of Gnadenhutten.

Heckewelder assisted in reestablishing the Moravian Indian refugees from Pennsylvania in Ohio after the war. He also was instrumental as a negotiator between the Indian communities and the new United States government. After his retirement, he returned to Bethlehem, but continued to occasionally work as an interpreter and agent for the Indians for some years. He devoted his greatest energies to writing, however. He published 3 books between 1818 and his death in 1823, which were based on his intimate knowledge of the Delaware. Leading scholars sought him out for details of the Indians’ languages, customs, and legends. He essentially served as a bridge between his generation, who grew up while the Indians still inhabited Pennsylvania and other eastern states, and new generations whose only knowledge of the aboriginal peoples came from history books. 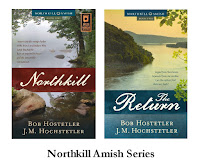 J. M. Hochstetler is the daughter of Mennonite farmers and a lifelong student of history. She is also an author, editor, and publisher. Northkill, Book 1 of the Northkill Amish Series, won ForeWord Magazine’s 2014 INDYFAB Book of the Year Bronze Award for historical fiction. Book 2, The Return, releases in April 2017. Her American Patriot Series is the only comprehensive historical fiction series on the American Revolution. One Holy Night, a contemporary retelling of the Christmas story, was the Christian Small Publishers 2009 Book of the Year.