Buckey O'Neill: Jack Of All Trades

Buckey O’Neill was one of those Western men who did a little bit of everything. I first became aware of him during our trip to Grand Canyon last summer, but upon returning home, I did further research and found him to be quite the character.

William Owen O’Neill was born in St. Louis, Missouri, in February 1860. He moved to Washington, D.C. with his mother and brothers, and later graduated from the National Law School. He applied for the Assistant Paymaster of the United States Navy, and of seventy-two applicants, he was the one chosen. However, when the appointment was delayed, O’Neill ended up going west instead.

Her arrived in the Arizona Territory in 1879, and by 1880, took up residence in the town of Tombstone. As many men did in that day and in that town, O’Neill got involved in gambling, playing the common game of the day, Faro. He liked to play against the odds, which was known as “bucking the tiger.” And thus came his nickname, “Buckey.” It would be the name he was known by the rest of his days.

Buckey took a job with the local newspaper, the Tombstone Epitaph. This was during the days when the Earp brothers provided law enforcement for the town, and since the Epitaph was a pro-Earp newspaper, Buckey likely had plenty of dealings with the famous brothers. In fact, it may very well have been Buckey who reported on the shootout we know as the “Gunfight at the O.K. Corral.”

Soon after that incident, Buckey became a special deputy for the Phoenix City Marshal Henry Garfias. In 1882, he, Garfias, and two other officers faced down a trio of drunken cowboys who went on a shooting spree along Washington Street. As the story goes, the four lawmen attempted to arrest the drunken men, who in turn charged their horses directly at the marshal and his deputies. Garfias fired two shots, first knocking the gun from one of the men’s hand, then killing him. Upon seeing their friend die before their eyes, the remaining two cowboys surrendered quite willingly.

Later in 1882, Buckey moved on to Prescott Arizona, where he settled down. He became a court reporter, editor of the Arizona Miner, as well as began his own newspaper dedicated to the livestock industry, the Hoof and Horn. He served as school superintendent, tax collector, Yavapai County probate judge, and a member of the volunteer firefighters known as the “Toughs.”

Four years later in 1886, he joined the local branch of the Arizona militia, the Prescott Grays, where it is said that he once passed out while on the honor guard, serving at the hanging of a convicted murderer. Once the trap door dropped from under the murderer’s feet, poor Buckey also dropped unconscious. It was a moment he never quite lived down.

In the same year, married Pauline Schindler. He and Pauline quickly had a son, but the boy was born premature and lived only two weeks. Later the same year, they adopted a child who they named Maurice.

While serving as judge in Yavapai County, Buckey ran for and was elected Sheriff. On March 20, 1889, four cowboys decided to rob the train in Diablo Canyon. As soon as Buckey heard, he gathered a posse of three other men—Carl Holton, Jim Black, and Ed St. Clair—and rode to the scene of the crime. They tracked the bandits for weeks and eventually caught up to them near Wahweap Canyon. When one of the bandits made a break for it, Buckey shot the man’s horse out from under him. In turn, the man shot Buckey’s horse as well, and Buckey was temporarily pinned by the dead saddle horse. However, the rest of the train robber gang were so surprised by the outbreak of gunfire that their horses all ran off, stranding the men on foot. It took very little time for the posse to capture the four. This incident elevated Buckey to the status of hero. 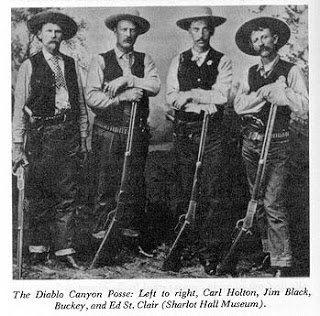 When his term as sheriff ended, Buckey chose not to run for the office again, and instead delved into mining. He became quite prosperous with onyx mines across the next several years. He also spent his time writing pamphlets promoting the Arizona Territory, as well as fictional stories he published in a few newspapers and magazines across a span of twenty years.

With his interests in mining, Buckey soon struck on an idea—create a railroad between Williams, Arizona, and Grand Canyon, which was sixty miles away. The railroad would provide a means for the mines to transport the heavy ore more easily, as well as provide a means for tourists to visit the beautiful canyon that was otherwise difficult to reach. He became instrumental in securing the funding to build the Grand Canyon Railway. (You can read more of the story here in my earlier blog post on the railway). He also built a cabin there on the South Rim, which still stands today.

Politics wasn’t completely out of Buckey’s system. In the 1890’s, Buckey ran twice to become the Territorial delegate to Congress (1894 and 1896). However, he ran under the Populist party and was defeated both times by major party candidates. His final foray into political office was to run for mayor of Prescott, which he won handily in 1897.

His stint as mayor didn’t last long, though. When the Spanish-American War broke out in 1898, Buckey mounted a volunteer force from the men in Arizona Territory. He was made the captain of Company A, 1st US Volunteer Cavalry, which most people would know better as Teddy Roosevelt’s Rough Riders. He and his men fought in the Battle of Las Guasimas and moved on to the Battle of San Juan Hill. Unfortunately for Buckey, his penchant for bucking the odds ran out here. At the age of 38, he was struck in the head by a bullet and died instantly. His men buried him on San Juan Hill, but his body was later exhumed and relocated to Arlington National Cemetery. Nine years after his death, a monument featuring Buckey as a Rough Rider was unveiled in Prescott Arizona, and he was portrayed by Sam Elliott in the TNT movie, Rough Riders.

It’s your turn: Have you ever heard of Buckey O’Neill? Which of his many accomplishments most impresses you?

Jennifer Uhlarik discovered the western genre as a pre-teen when she swiped the only “horse” book she found on her older brother’s bookshelf. A new love was born. Across the next ten years, she devoured Louis L’Amour westerns and fell in love with the genre. In college at the University of Tampa, she began penning her own story of the Old West. Armed with a B.A. in writing, she has won five writing competitions and finaled in two other competitions. In addition to writing, she has held jobs as a private business owner, a schoolteacher, a marketing director, and her favorite—a full-time homemaker. Jennifer is active in American Christian Fiction Writers and lifetime member of the Florida Writers Association. She lives near Tampa, Florida, with her husband, teenaged son, and four fur children.