Penguins and a Giveaway 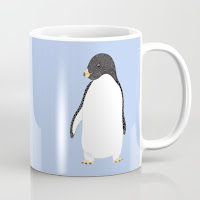 When I thought about what to write for my blog this month, I considered all my friends and family who are going through extreme cold temperatures and record snowfall. I also thought of a couple of extra gifts that I ordered for Christmas and didn’t use. The mugs I have both are penguin mugs, so I thought we should explore a little history of penguins. When I picture penguins, I picture snow and cold, so they seemed fitting for a blog.


Imagine what early explorers must have thought when they found these flightless birds the walked in such an awkward manner and dove into the water. It is said penguins were not afraid of people because they had no natural predators on land. Penguins were known to walk right up to groups of people, bold and curious.


There are differing opinions on which explorer first found penguins. Some people believe Vasco da Gama was first; others believe Ferdinand Magellan did. Those who back Ferdinand Magellan often think he named the Magellanic Penguin, but opposing views believe that penguin was named after the Straits of Magellan.


Earliest occurrences of the word penguin are similar to the word ‘great auk.’ Some feel the early Explorers thought the penguins were similar to the great auk and that is where there name came from, even though the birds are not close relations.


I was surprised in my research to find so many different types of penguins and they range across a wide area of the southern hemisphere and one is native in the northern hemisphere. There are seventeen to twenty different living species, although, once again, there is some debate about which are simply color variants and which are different species. I won’t go through all of them, but will show you a few of the different ones and where they are native.

The Emperor penguin is a familiar one to us. This penguin lives in Antarctica, and is the largest of these birds. They are known for living in very harsh conditions, trekking for miles across the ice, and being part of colonies that can be in the thousands. The female of this species lays one egg, which is cared for by the male while the female travels back to the sea to get nourishment. Then they share in the care and raising of the young one.

Adelie penguins also live in Anarctica, but they inhabit the coast instead of trekking inland. They are well known for their snow white breast and stomach. A 1910 expedition reported the Adelie penguins were so fearless, they would often jump right onto the ice where the sled dogs were tethered. Many of the birds met their demise this way.


The Magellanic penguin, mentioned earlier, lives in South America. These birds breed along the coast of Argentina, Chile and the Falkland Islands. Some have even been seen as far north as Rio de Janeiro in Brazil.

The smallest of the penguins, the Galapagos penguin, lives right at the equator
and sometimes north of the equator in the Galapagos islands. This small bird is only about five pounds. They tend to stay in the water most of the day and return to land at night when the temperatures cool.

Here are some fun facts I discovered about penguins.


Hearing- Penguins have some unique speech patterns, but don’t have very good hearing. Their other senses are more developed and they have very good eyesight, both in the water and on land. Studies have shown they probably see in color.


Water – Penguins can spend a long time in the water. If you have seen documentaries on penguins, you know that when they swim they appear to be flying through the water. They are beautiful to watch. They can dive up to 1,700 feet, depending on the species. They do need to surface for air, but can stay submerged for up to twenty minutes.


Sleep – Penguins sleep standing up, so many times people have thought they don’t sleep. How much they sleep depends on the environment and whether they are molting.


Sun – Penguins use the sun to guide them as they travel across the ice. They are also subject to sunburn. This is why they cover their feet with their flippers when they sleep.

I would love to have seen the early explorers when they found these flightless birds. I wonder what they thought of them. Of course, I wouldn’t have wanted to brave the cold and hardships of travel to places like Antarctica or those climes to see them. Maybe some day I would enjoy traveling to the southern hemisphere in their summer to see these birds.

Have you ever seen a penguin in the wild? Do you have a favorite species? Leave a comment, along with your email, on the blog to be entered in the drawing for one of these mugs. I am giving two of them away. I will accept comments until midnight on January 18th. (PST) These mugs were designed by my daughter, who has her artwork here.

Nancy J Farrier is an award winning author who lives in Southern California in the Mojave Desert. She loves the Southwest with its interesting historical past. Nancy and her husband have five children and two grandsons. When Nancy isn’t writing, she loves to read, do needlecraft, play with her cats, and spend time with her family. Nancy is represented by Karen Ball of The Steve Laube Literary Agency. You can read more about Nancy and her books on her website: nancyjfarrier.com.
Posted by Nancy J Farrier at 12:30 AM