The Echoes -- As Beautiful Today as in Yesteryear 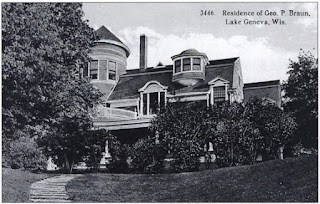 For the first stop of 2017, in our tour of the old mansions and estates of Lake Geneva, WI, we’re going to pass by one called Westgate and head to the next one. Hopefully, we’ll backtrack next month and you can hear a very special story about Westgate. I just need a little more research before I can tell about that property.

The home known as Echoes was built in 1896, by George P. Braun. Mr. Braun commissioned well-known architect, Henry Lord Gay, to design the home. He wanted the latest and most modern conveniences included in the home’s design and the home included the most modern plumbing system available at that time.

Mr. Braun made his fortune in what was known back then as oleomargarine. The butter substitute was actually invented in 1870 in France when a substitute for butter was sought. His company churned (sorry I couldn’t resist) out margarine and became quite successful. He was able to incorporate the company in 1889. Soon after, he decided to sell the margarine company to John F. Jelke who renamed the product Good Luck Margarine, and that brand stayed around a very long time. In fact, during the 1960’s Eleanor Roosevelt made a commercial for the product. The Jelke’s often visited the Echoes. 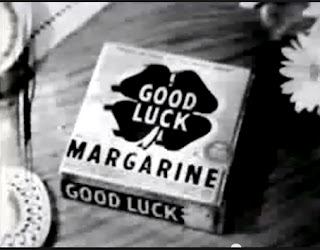 In 1913, Braun decided to sell the property and it was purchased by Amariah Cox who renamed the estate Pleasant Hill. He purchased the rubber paint company he worked for and moved the entire operation to Chicago from Cleveland, OH.

Included in the sale was a small company called Zeno Manufacturing, which made chewing gum. One of Zeno’s customers was a struggling soap salesman, William Wrigley, Jr. Mr. Wrigley went into the chewing gum business and, of course, you’ve heard of Wrigley’s Chewing Gum. The Wrigley home, Green Gables, was featured on this blog a few months ago.

After Mr. Cox passed away in 1941, the estate was sold intact. In 1957 it was subdivided and the subdivision became known as Brookwood. The original home is still there on the lakeshore and can be viewed from the water.

A native of Lake Geneva, Wisconsin, author Pamela S. Meyers lives in suburban Chicago with her two rescue cats. Her novels include Thyme for Love and her 1933 historical romance, Love Finds You in Lake Geneva, Wisconsin Her novella. What Lies Ahead, is part of a novella collection, The Bucket List Dare, which is now available at Amazon in both print and Kindle formats. Second Chance Love from Bling!, an imprint of Lighthouse Publishing of the Carolinas, will release January 10, 2017 and is available at Amazon.com. When she isn’t at her laptop writing her latest novel, she can often be found nosing around Wisconsin and other Midwestern spots for new story ideas.