I don't know about you, but I'm very tired of winter. We live in the Pacific N.W., but where it snows a lot (middle of the Cascade Mountains), unlike much of the rest of the area where it's often just rain. We're having an 'old-time' winter, unlike what we've had the past 15 yrs--the type we had while raising our kids--snows 3 ft deep and beyond. I think we've had an accumulation this winter of over 7', but thankfully, never more than 3'-3 1/2 ft on the ground at one time. But that's plenty.

So I thought I'd investigate harsh winters of years past and see what the pioneers were up against. I'll have to say, I'm thankful for snow plows, graders, and all the other things that make our lives easier when it snows.

January of 1888 saw the most intense cold wave on record impact the Inter-mountain west and Northwest portions of the country. This spread eastward during the third week of the month bringing additional all-time cold records to the upper Midwest. 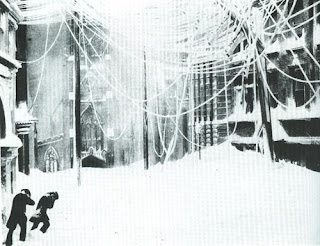 One of the only known photographs taken in Manhattan during the height of the blizzard itself. This is Wall Street. Note the broken telegraph pole on the right. New York Historical Society.

Refugee’s filled all the hotels. The venerable Astor Hotel set up 100 cots in its lobby when it became apparent by sunset that day that venturing outside was still impossible, the temperature had fallen to 8° by sunset, the wind was still howling and snowdrifts up to 20’ filled the streets of the city.


Some of the all-time coldest temperatures recorded in January 1888 that still stand today include the following: 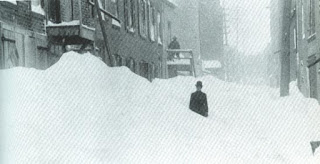 An amazing 55” of snow (on level) buried Troy, New York during the storm. Here, drifts reach the second story in an alleyway in the city. Rensselaer County Historical Society.

The coldest temperature during the month was a -56.8° at Poplar River, Montana on January 15th. Of course, there were very few weather stations in the far west and Rocky Mountain areas in 1888, so many other locations would probably have had record low temperatures if they had observation sites at that early date.

The cold wave was preceded by a terrific blizzard in the upper Plains and Midwest on January 12-13. Known as ‘The Children’s Blizzard’ (as immortalized by David Laskin in his superb book of the same name) approximately 200-250 settlers died from exposure, mostly children trapped in the storm on their way home from isolated prairie schools in South Dakota and Minnesota. 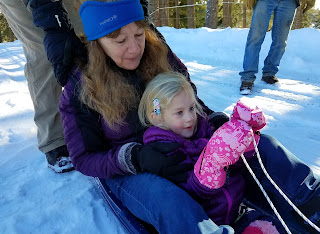 This picture of me and my granddaughter taken a month ago is just for fun--the guys and the sled are all standing on frozen snow close to 3' deep.


Then there was 1816--The Year Without Summer
I can't even imagine what that would be like.

A Massachusetts historian summed up the disaster:

Severe frosts occurred every month; June 7th and 8th snow fell, and it was so cold that crops were cut down, even freezing the roots .... In the early Autumn when corn was in the milk it was so thoroughly frozen that it never ripened and was scarcely worth harvesting. Breadstuffs were scarce and prices high and the poorer class of people were often in straits for want of food. It must be remembered that the granaries of the great west had not then been opened to us by railroad communication, and people were obliged to rely upon their own resources or upon others in their immediate locality.[11] 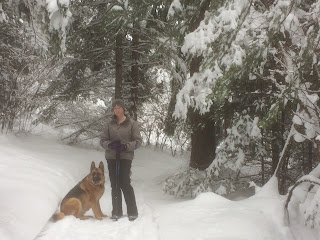 Another snow picture...my daughter and her dog Amira on one of the trails through the woods where we walk, winter or summer. The trail was packed by a snowmobile and was about 2 1/2 ft deep when this was taken. There was another foot of snow on each side, where it hadn't been packed down.

In Cape May, New Jersey, frost was reported five nights in a row in late June, causing extensive crop damage.[12]

In July and August, lake and river ice was observed as far south as northwestern Pennsylvania. Frost was reported as far south as Virginia on August 20 and 21.[13]Rapid, dramatic temperature swings were common, with temperatures sometimes reverting from normal or above-normal summer temperatures as high as 95 °F (35 °C) to near-freezing within hours. The weather was not in itself a hardship for those accustomed to long winters. The real problem lay in the weather's effect on crops and thus on the supply of food and firewood.

Evidence suggests that the anomaly was predominantly a volcanic winter event caused by the massive 1815 eruption of Mount Tambora in the Dutch East Indies (the largest eruption in at least 1,300 years after the extreme weather events of 535–536), perhaps plus the 1814 eruption of Mayon in the Philippines. The Earth had already been in a centuries-long period of global cooling that started in the 14th century. Known today as the Little Ice Age.

Miralee Ferrell is a best-selling, award-winning author with 22 books in print, and three more coming this year. Her upcoming release, Runaway Romance, will air as a made-for-TV movie in October of this year. She loves hiking with her daughter and her dogs, riding horseback, reading, gardening, and writing, and lives in the Pacific N.W.
Posted by Miralee Ferrell at 1:00 AM