The Home of the Friendless in 1800s Nebraska 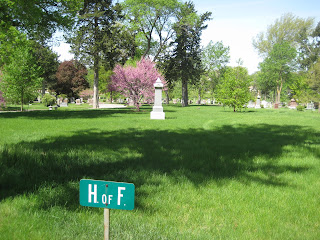 Do you find old cemeteries intriguing because of the hidden stories behind the epitaphs? A sign in Wyuka Cemetery in Lincoln, Nebraska hints at a wonderful story of compassionate women. "H. of F." references the Home of the Friendless, founded in 1876 by women dedicated to helping the homeless, unwed mothers, and orphans.
“In 1876 … charitable women of Nebraska organized a society known as the ‘Home of the Friendless,’ … to furnish a refuge for friendless children, girls, young women, and old ladies.” By 1881, “so many friendless and deserted children came to our doors requiring protections that the state legislature … appropriated the sum of $5,000 to assist the society by the erection of a permanent building.” Here’s a photo of the Home of the Friendless from around 1917. 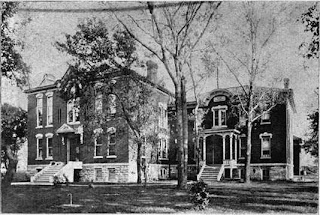 Most of us don’t really think of the 1870s and 1880s as a time when many people were “friendless.” We think of it as a kinder and gentler time. Sort of “little-house-on-the-prairie-ish.” But 1876 was a dismal time in Nebraska. Thanks to hordes of grasshoppers, “property fell to ruinously low prices, farmers had little to buy with, and hundreds not only left their farms, but the town of Lincoln also.”
The hand-written meeting minutes from the early days of this organization reveal historical tidbits that would eventually inspire a novel.
They hired a full-time Matron (for $25 a month.) A Matron. (Ah … a character for a story.)
“Mrs. X will furnish the parlor and hall with carpets and curtains, parlor and back parlor for a bedroom …” (Ah. Mrs. X must have been rich.)
In August of 1883 an “interesting old lady” was admitted at $3 a week board. “Two little babies were brought to the home … we do not think they will live.” A boy who had been adopted out was being brought back because of “dissatisfaction.” He was returned to the home and then taken by another couple “who had his little sister.” “Mrs D. was hired to work in the nursery for $8 a month plus the boarding of her three children.”
In July, 1886, “The committee on cemetery grounds reported the old lots nicely planted with bedding plants from the greenhouse and the new lots to be graded and sodded by fall.”
Some of the entries in those historical documents broke my heart. Some inspired me to thank my heavenly Father for the boundless blessings I knew when I was raising my four children. When my husband died and I became a single mother,  I wasn’t "friendless" like this woman in 1881: “A young mother was brought to the gate of this Home with a three days old baby. I took the child as she came to the steps and carried it to the nursery. Also assisted her to a room. In a week she was able to work and we found her good help. Her child is healthy and growing nicely. She has given it to the home.”

Today, never-married mothers aren’t treated like pariahs. “July 8—I received a letter asking the admittance of a young girl, one of the deceived and deserted ones. At first my heart rebelled when this class of inmates came, but after knowing them better my heart turns toward them, and I have done what I could to lead them to a better life.”
July 28, 1881 “Our dear little patient Hazel has gone to the home where sin and poverty will never enter, and where she will not be friendless, for Jesus has taken her to himself.”
I greatly admire the women of the past who looked beyond themselves to help others. In 2017, it's easy to let the government take charge of meeting the needs of the homeless, but local churches still often take the lead. In our home town, the city mission does wonderful work for families. My church has a clothing outlet that provides gently used items free for anyone in need. If you're involved in a ministry like this, may God bless you! 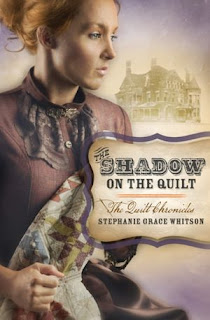 The Shadow on the Quilt is my tribute to the women who created Lincoln, Nebraska's Home for the Friendless in 1876. It's due to be re-released this summer.
Posted by Stephanie Grace Whitson at 12:00 AM

Email ThisBlogThis!Share to TwitterShare to FacebookShare to Pinterest
Labels: Home of the Friendless, Nebraska history, Stephanie Grace Whitson, The Shadow on the Quilt