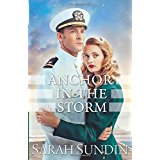 Giveaway: Leave a comment below by Friday, 3/3, at 8:00 PM (EST) and earn a chance to win Sarah Sundin's WWII book, Anchor in the Storm. Share on Facebook or another favorite social media site and earn an extra chance to win. Don't forget to leave your e-mail address and let me know if you've shared.
Posted by Cindy Kay Stewart at 12:30 AM