The Victorian Chamber of Horror: AKA the Parlor

I once wrote a scene in which my cowboy hero was forced to sit in a formal parlor.  It was during the age of clutter which meant the front room was filled to capacity with ornate furniture, needlepoint cushions, framed photographs, musical instruments, and enough doo-dads to create a dusting nightmare. The poor man in my story couldn't move without knocking over a beaded fringed lamp or a delicate music box. Worse, he had to trust his six foot two bulk to a spindly chair since no "sincere" furniture existed. 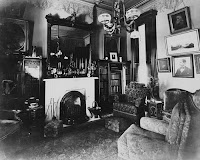 Of course parlors were never designed for comfort.  Instead a proper parlor had one purpose and one purpose alone; to showcase a woman's gentility to all who entered.
In his book Domesticated Americans, Russell Lynes describes the parlor as a chamber of horrors for children. "It (the parlor) set husband against wife, daughter against father and swain against maiden."  It also took a lump out of the family budget.
No one really knew how to act in a parlor and this unleashed a steady stream of articles and books on the subject.  Not only were people counseled on how to enter a parlor without "Jiggling their bodies" but how to leave it. 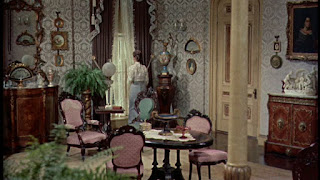 The Ladies Indispensable Assistant explained the rules of exiting in great detail. "Don't stand hammering and fumbling, and saying 'Well I guess I must be going.'  When you are ready go at once."
Parlor rules existed for every possible situation, even courting.  Never was a man to sit with his "arms akimbo" or strike an awkward pose.  Nor was he to enter a parlor without the lady's invitation. 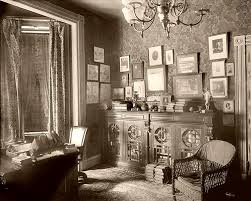 Visitors were cautioned against talking about religion, politics, disease, dress or, heaven forbid, one's self.  Cookbook and etiquette writer Miss Leslie wrote that inquiring about a hostess's children was to be done "with discretion."  Saying that a son "was the very image of his father," could be offensive if the father was not a handsome man.  Even then the visitor could be treading on ice if "the mother was vain and wished the children to look like her."
Several things happened to make the parlor with its endless rules fall out of favor.  Women were admitted to college and some had entered the work force. No longer was a woman judged by her parlor but rather by her contributions to society.
The westward movement should also receive credit for putting sanity into the home.  Though some pioneer women tried to carry the tradition westward, they soon learned the folly of their ways—much to their husbands' gratitude.
Not all parlors died a quiet death.  Some lingered into the twentieth century.  As a child, I remember our next door neighbor's parlor—and yes, that's what she called it.  Everything in it including the lampshades were covered in plastic.

Did any of you spend time in such a room? 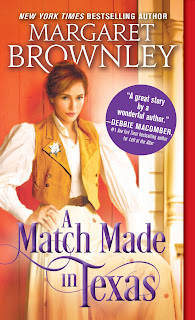 There's a new sheriff in town and she almost always gets her man!

A Match Made in Texas