An American in Tuscany

Love American history? Me, too! In fact, I love it so much I went back to school in 2012 to work on a master's degree in historical studies--with a concentration in North American history. Loved every minute of it. 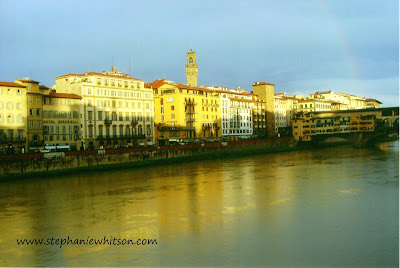 Studying history gives us all perspective on our own corner of the world. For example, here in Nebraska where I live, something that can be dated early 1800s is old. Head east into Virginia, and old can take one back into the 1600s.  But even that is nothing compared to the history one encounters in Europe. The Pont Neuf in Paris (pont neuf means "new bridge") was begun in 1578. The Ponte Vecchio in Florence, Italy, (ponte vecchio means "old bridge") was built in 1345. I took the photo above when visiting Florence many years ago. The Ponte Vecchio is at the far right. I remember a tour guide telling us that this is the only bridge in Florence to survive World War II. Hitler wanted to stand on it and watch as the other bridges in the city were destroyed. 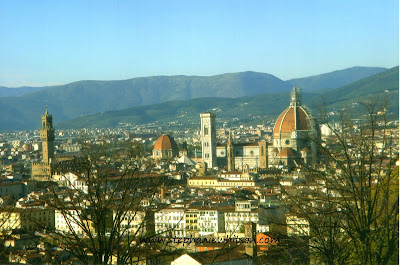 Florence is a wonderful place to bask in art and architecture. The brick red dome of Santa Maria del Fiore (pictured at left) was a revolutionary achievement in its day--built without scaffolding. 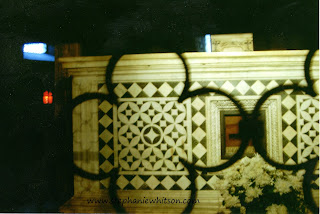 I marveled at the intricacy of the marble work in floors, cathedral walls (some begun as early as the year 1090), and reliquaries like the one here, which I thought of as a marble quilt. 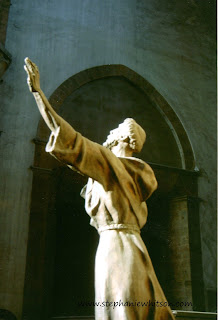 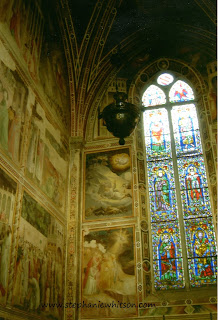 As for art, frescoes turn church interiors into expansive canvases on which artists told Bible stories and stories of the saints to illiterate parishion-ers of long ago.

You have of course heard of one of the most famous of Tuscan artists, Michelangelo--and of his rival, Leonardo da Vinci. But there is much more than "just" David to appreciate in Florence. At the moment I photographed this praying monk at Santa Croce (build in 1294), a ray of light illuminated his form.
I was reminded of our great privilege of prayer and filled with joy at the idea that the God who inspired the vast riches of artistic expression evident in Florence was also the gracious and loving Father who invites His children to cast all our cares on Him, for He cares for us.

Old is a relative thing ... what does it mean where you live? What treasures of architecture or art do you enjoy most?

You can take an imaginary trip to Florence in Stephanie's novel A Hilltop in Tuscany. When successful businesswoman Liz Davis travels there to be with her mother as Mary recovers from an injury, Liz is forced to examine her life's priorities. Will she have the courage to face the possibility of sacrificing everything she's worked for in order to find lasting happiness?

Learn more about Stephanie and her other books at www.stephaniewhitson.com.

Posted by Stephanie Grace Whitson at 12:00 AM