In my last few posts we considered the lot of the colonial housewife. Well, the farmer’s life wasn’t a piece of cake either. If you know anything about today’s highly mechanized farms, try to imagine what it would have been like to do all that work without any of our modern tools. Today we’re going to take a look at some of the implements the colonial farmer had at hand and how he went about the daily work of tilling the land, planting seed, and harvesting his crops.

The barn was the farmer’s most important “tool” and the first structure he built after raising a modest cabin to shelter his family. In fact, sometimes the barn was built first while the family lived in a lean-to or other temporary structure. Barns housed farm implements and some livestock and provided a place for milking the cows and storing the harvest. They also provided a large open space for hosting extended family or community get-togethers for work and for frolics that lightened the farm families’ hard lives.

Before the industrial age most work had to be done with hand tools and muscle power. That’s why farm families usually had a lot of children. More children meant more hands for the work, but also, of course, more mouths to feed, which necessitated larger fields for crops and thus more work and workers and…well, you get the idea. Every solution has its own problems. But as they say, necessity is the mother of invention. Over time ingenious inventers developed a wide variety of tools to make farm work easier and more efficient so that fewer laborers and less time were needed.

One of the first real innovations was to harness animals to do some of the work. A horse is as strong on average as five men. The average horse weighs around 1,000 lbs. and can carry 250 lbs. A draft horse can draw around 1,600 lbs. and can pull a carriage approximately 25 miles per day on level roads. A horse can only pull up to 1 ½ times its weight, however, while an ox can pull around 2 ½ to 3 times its weight, which makes it preferable for heavier loads. By colonial times the majority of even the poorer farmers had at least one ox or horse. Nevertheless, many jobs still had to be done manually.

When it came to preparing the soil for planting, a number of hand tools were available. A tool similar to a pickaxe called a mattock was used for chopping through and digging in hard soils and grubbing out roots. Cutter mattocks have an ax blade on one side of their heads and an adze on the other, while pick mattocks pair the adze with a pick. Spades and several kinds of hoes also aided the work. A narrow or hilling hoe was mainly used to create the mounds on which plants such as squash grew and for maintaining weed-free hills. Broad or weeding hoes were used for shallow cultivation, and grubbing hoes were used to dig up roots and heavy soil.

The most important tool for preparing the soil for planting, of course, was the plow—or plough in British parlance and as it used to be spelled in America before Daniel Webster reformed our spelling. Forget John Deere’s sharp, tough, steel plow that sped the work of breaking up tough prairie sod into fields. The overwhelming majority of farmers on the colonial frontier wouldn’t have been able to afford one even if it had been invented by then. Which it wasn’t. We’re talking about the venerable old wooden mold-board plow, which was just beginning to be supplemented with an iron plate on the cutting edge. This form of plow could be pushed by the use of handles or pulled by an ox or horse.

The method was different for planting corn. The farmer plowed furrows across his fields at right angles to each other to create a grid pattern, with the distance between the furrows’ intersection varying according to the variety of corn. For large varieties like gourdseed, furrows were spaced so they crossed from four to eight feet apart, with six feet being most common. Three to 6 kernels were planted 2 to 3 fingers’ breadth deep at each intersection and thinned to 2 to 4 plants per hill after they sprouted. The soil could either be hilled first, then planted or planted first and the hills built up around the base of the plants as they grew. Some colonists planted beans and squash in the hills of corn as the Native Americans did. This was an effective practice since the cornstalks supported the growing bean vines, while the beans fixed nitrogen in the soil for the corn, and the large squash leaves shaded out weeds at their base.

When sun and rain had done their work and harvest time arrived, grain and hay had to be cut by hand using a crescent-shaped hand sickle with fine cutting teeth, a smooth edged reap hook, or a scythe. This isn’t an easy job, to say the least, but in colonial times an efficient farmer could harvest, bind, and stack crops from a quarter of an acre in one day—which may not seem like much today, but believe me, that’s a stretch when you’re doing it by hand. Scythes were larger and more efficient for this job, but they were also more expensive and took more strength and skill to use. They did minimize bending and saved the poor farmer’s back, however! Grain crops were generally bundled into stocks for storage, but had to be threshed before the grain could be used. Hay was simply left in the field to dry, and then was tossed into wagons with pitch forks and taken to the barn for storage.


Threshing, or separating grain from the plant’s stalk, was done either by beating the grain heads with a flail (a stick tied to a handle), or by treading—spreading the grain across a circular, packed-earth threshing floor and walking horses across it to dislodge the grain. Once separated from the stalks, the grain was passed through a riddle (a course sieve) on a windy day or through a winnowing or Dutch fanning mill to sift out chaff and dirt. Corn was shelled either by hand—which, trust me, will really tear up your hands!—or by pulling the cob across an iron scraper attached to a tub that collected the grain. I’m sure there was joy on the farm when the automated corn sheller was finally introduced!
Naturally it was also important for a farmer to have a wagon to transport his crops and other goods and his family as well. Smaller vehicles such as hay wagons were used for most purposes, but in the early eighteenth century a specific type of heavy covered wagon for transporting goods, called a Conestoga, was developed. First mentioned in 1717, it was used extensively well into the nineteenth century, carrying so many pioneers west across the plains that it came to be called a prairie schooner. It could carry up to 12,000 pounds, and its upward-curving floor prevented cargo from tipping and shifting. The seams in the body of the wagon were sealed with tar for protection against leaks while crossing rivers, and a tough white canvas cover protected its contents from the weather.

I grew up on a farm in central Indiana, so I’m very familiar with the hard work farm families do. Even so, the sheer amount of manual labor our ancestors had to do during colonial times is really intimidating. Whether male or female, our ancestors had little time off from their labors!

Were there any tools mentioned in today’s post that you weren’t familiar with? Are there other farm or garden tools I didn’t mention that were used in colonial or earlier times that you’ve learned about? If so, please share!
~~~ 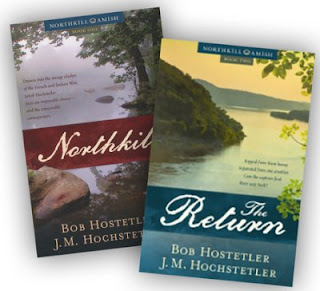 J. M. Hochstetler is the daughter of Mennonite farmers and a lifelong student of history. She is also an author, editor, and publisher. Northkill, Book 1 of the Northkill Amish Series coauthored with Bob Hostetler, won Foreword Magazine’s 2014 INDYFAB Book of the Year Bronze Award for historical fiction. Book 2, The Return, released April 1, 2017. Her American Patriot Series is the only comprehensive historical fiction series on the American Revolution. One Holy Night, a contemporary retelling of the Christmas story, won the Christian Small Publishers 2009 Book of the Year Award.
Posted by J. M. Hochstetler at 12:00 AM