Fingerprints and a giveaway

Susan Page Davis here. A lot of my books involve fingerprinting, and I had the exciting opportunity to experience it myself a few days ago. Because it involved a travel permit, it was done through a branch of Homeland Security, and they have the latest technology. No ink, no paper cards to be filed. It’s all electronic nowadays. But how did the collection and comparison of fingerprints start? 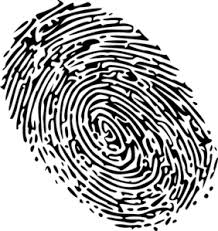 Way back, earlier than 1000 B.C., fingerprints were used on clay tablets to seal business transactions in ancient Babylon.


The Chinese began using thumbprints on clay seals to “sign” documents in the third century B.C. During the T’ang Dynasty, 610 to 907 A.D., fingerprints were used on official documents.


In the 14th Century A.D., in Persia, many government documents had fingerprint impressions, and a government physician noted that no two fingerprints were exactly the same.


In 1823, a Prussian professor of anatomy, Johannes Purkinje, described nine fingerprint patterns. Still no mention was made of using fingerprints as a method of identification.


In 1858, Sir William Herschel, who was the chief magistrate of the British District of Jungipoor, India, began requiring a fingerprint and signature on civil contracts completed there with native Indians. He used this to make the people involved feel more bound to the contract, but over time he made the observation that no two were alike, and he said that fingerprints could be used for personal identification purposes. Herschel collected his own fingerprints over more than fifty years and noted that they did not change.


In 1877, The American Journal of Microscopy and Popular Science reported that microscopist Thomas Taylor, with the U.S. Department of Agriculture, proposed that finger and palm prints left on any object might be used to solve crimes.


Dr. Henry Faulds, a British surgeon supervising a hospital in Tokyo, published an article in a scientific journal in 1880. He discussed using printer’s ink as a method of collecting fingerprints for the purpose of personal identification. He developed a system of classifying them and sent his observations to Charles Darwin. Darwin, who was aging and ill, forwarded Dr. Faulds’s data to his cousin, Sir Francis Galton.


In 1882 fingerprints were first known to be used for identification in America by Gilbert Thompson. An employee of the U.S. Geological Survey in New Mexico, he used his own fingerprints on a document to guard against forgery.


Author Mark Twain was interested in fingerprinting, and he used it in two of his novel plots. In Life on the Mississippi (1883), a murderer was identified by the use of fingerprints. In his 1884 book, Pudd’nhead Wilson, Twain made it a major part of the plot, and fingerprint evidence was included in a courtroom scene.


Darwin’s cousin, Galton, published the first book on fingerprints in 1892. He was a British anthropologist, and he discussed in his book the uniqueness of fingerprints and the individual details they contain.


In 1896, the International Association of Chiefs of Police established the National Bureau of Criminal Identification. Its purpose was exchanging arrest information between agencies.


In 1901, back to India: Sir Edward Henry, an inspector general of police in Bengal, developed the first system of classifying fingerprints. It was adopted as the official system in England and eventually spread over the world. He was later the Home Office Secretary and published “The Classification and Use of Fingerprints.” The Fingerprint Branch of New Scotland Yard was established, using Henry’s system. 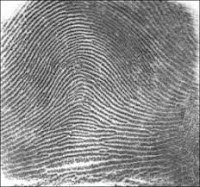 In 1902, a Paris murder case was solved when police took a fingerprint from the crime scene and matched it to one already on file, belonging to a criminal previously arrested. In America at this time, the systematic use of fingerprints was beginning. In 1905, the U.S. Army began taking members’ fingerprints, and the Navy and Marine Corps began doing so within three years.

In 1910, Frederick Brayley published the first American textbook on fingerprints, "Arrangement of Finger Prints, Identification, and Their Uses."

Fingerprints were first accepted by United States courts as a reliable means of identification in 1911. Thomas Jennings was the first person to be convicted of murder in the U.S. based on fingerprint evidence.


Also in 1911, the first central storage place for fingerprints in North America was established in Ottawa, Canada, maintained by the Royal Canadian Mounted Police.


In 1924, Congress established the Identification Division of the F.B.I. By 1946, the F.B.I.’s fingerprint repository had more than 100 million fingerprint cards.
The first computer database of fingerprints was developed in 1980. It came to be known as the Automated Fingerprint Identification System (AFIS). Today there are nearly 70 million records (about 700 million individual fingerprints) entered in the AFIS system. Computers can search millions of records in this system in minutes.


In 1996, fingerprinting of children became common in America as a guard against abduction. Parents were given the record card or a home fingerprint kit, maintaining their privacy unless the record was needed. More than 5 million Child ID Fingerprinting Kits had been distributed around the world by 2001.


In 1999, the F.B.I. phased out the use of cards and now uses the integrated AFIS system, based in Clarksburg, W.V., which contains computerized records for approximately 33 million criminals. Older paper cards are still maintained at another facility.

These are just a few of the significant events in the history of fingerprinting. The detectives in my Maine Justice series use fingerprints as one of many tools in solving their cases. If you would like to be entered in a drawing for your choice of books in this series, leave a comment below, including your contact information.