Today, I'd like to tell you about one of the hidden gems of southern Minnesota, the MN State Public School for Dependent and Neglected Children.

From 1886 to 1945, the state of Minnesota operated an orphanage in the town of Owatonna, MN. In the nearly sixty years the orphanage was in operation, more than 10,000 children called the place 'Home.' At the height of occupancy,  (In the Depression years of the 1930s) the institution averaged around five hundred children.

While many of the children were true orphans, many others were removed from abusive, neglectful situations. Every child who came to the school became a ward of the state of Minnesota, and parents had no rights once the child was removed from their care. 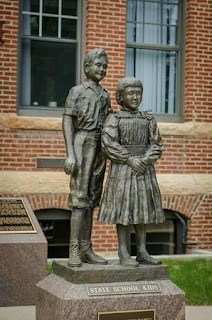 Upon arrival at the school, no matter what the child's age, they were placed in total isolation for three weeks. (After having their head shaved and being given a kerosene bath to kill whatever vermin might be making their abode on the child.) Once it was determined that the child had no communicable disease or mental instability that might prove harmful, they were placed into the nursery if they were under the age of four, or into one of the 'cottages.'

A cottage housed around thirty children at a time, all under the supervision of a house matron and two assistant matrons. It was luck of the draw whether you received a 'good' matron or a bad one. Siblings were separated according to age and gender, and they were allowed to see one another only on special occasions after that.

The orphanage, which was also a working farm for a good portion of the time it was open, boasted a school for children in 1-8th grade and a gymnasium with a swimming pool. Students from 9-12th grade attended Owatonna High School in town.

While the school tried to place children out for adoption as often as possible, most did not ever find a permanent home within a family. Older children were instead 'placed out,' which was a form of indenturing. In exchange for feeding, clothing, and housing a child (usually a teen-aged boy) and agreeing to send him to school for at least four months of the year, the host family received free labor. 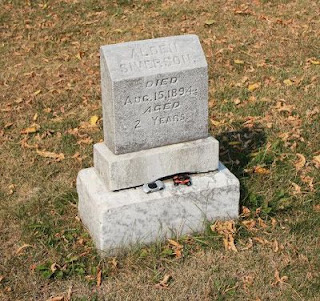 More than 300 children died while wards of the state at the school, and 198 of those are buried at the school cemetery. In the early days, gravestones were placed to mark the name and pertinent dates of the child's life, but for whatever reason, beginning in the late 1920s or early 1930s, the school stopped placing headstones with the child's name and merely placed a concrete rectangle with the child's school ID number. 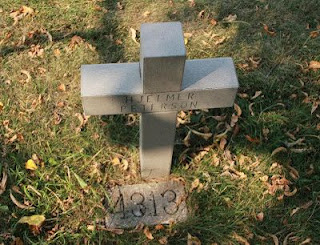 When the school closed, the cemetery fell into ruin, and it wasn't until the 1990s that the children who were buried in this cemetery received the dignity of having their names remembered. Crosses were placed, engraved with each child's name.

If you have the chance, I urge you to visit the museum. One man, Harvey Ronglien, who was a "State School Kid" for eleven years in the 30s and 40s, is often at the museum to give tours and answer questions, but "State School" kids are passing from this life, and soon no one living will remember...

There are several books written by "State School Kids" (This is what they proudly call themselves.) Two of the best I've read are "The Boy From C-11" by Harvey Ronglien, and "While the Locust Slept" by Peter Razor.

You can learn more about the Owatonna Orphanage at www.orphanagemuseum.com

In other news: My latest release is "Win, Place, or Show" in the Of Rags and Riches Novella Collection. You can find out more about Gard and Beryl's romance, and all the horses that help along the story HERE.