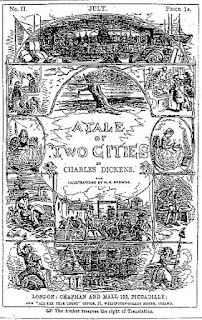 It’s August, which means school will be starting up soon for many of us, whether we are parents, teachers, or continuing students. As a high school English teacher myself, my mind is turning towards the classic literature I will be delving into with my students this year, starting off with one of my favorites, Dickens's A Tale of Two Cities.

Many of us love classic Victorian novels like those of the Bronte sisters or     Charles Dickens, but did you know we have the Industrial Revolution to thank for many of these books we still enjoy today? When I had the chance to study in Oxford, England, during my college years, I found the connection between Victorian Literature and the Industrial Revolution fascinating. I thought you might enjoy hearing a bit about it too.

The Industrial Revolution began in England in the late 18th century with the development of early machines for processing textiles and producing cloth. By the 1830s, the proliferation of factories and mill towns had changed the physical and social landscape of Britain. Family structure changed as people moved from farms to cities and women and children went to work in the factories as well as men.

Poverty and squalor abounded, but the Industrial Revolution had positive impacts too.

For one thing, while many children who suffered long hours working in the factories did not go to school, ultimately education and literacy increased as a result of the Industrial Revolution. The very presence of these children in the factories eventually raised awareness of their need for schooling, and benefactors established schools to give these little ones Christian and academic education. In fact, in 1844 Parliament passed a law requiring child workers to be given six half-days for schooling per week. The so-called “Ragged Schools,” Sunday Schools, schools for girls, and other public or charity schools meant that more and more children could learn to read and write despite the hardship of their lives.

With more working class people knowing how to read, the demand for reading material naturally rose. Coupled with mechanization’s greater ability to mass-produce texts, literature began to flourish like never before, with novels and poetry for both adults and children. Many of these authors, like Charlotte, Emily, and Anne Bronte, Charles Dickens, Lewis Carroll, Robert Louis Stevenson, Alfred Lord Tennyson, and Christina Georgina Rossetti, are still beloved today.

The darker side of the industrial revolution also fueled literature in a different way. Novelists like Charles Dickens and poets like Elizabeth Barrett Browning used their writing to shine light on the abuses of the poor, the horrible conditions of the working class, and the plight of children through books like Dickens’s Hard Times and Oliver Twist or poems like Browning’s “TheCry of the Children.” These works still stand as examples of how literature can touch people’s hearts and influence society for good.

Many of us don’t realize that most Victorian novels were published in serial form, usually a chapter at a time in newspapers or magazines, before they were released as an entire book. The industrial revolution had also produced an growing middle class, and for the first time many families had the time (and the literacy) to sit around the fire in the evenings at leisure together. And what better way to pass the time than to read a story aloud? So they would pick up a magazine or newspaper and read together the latest installment of Jane Eyre, Vanity Fair, or The Pickwick Papers.

There’s even a website now that has many of these classic novels organized by the serial order in which they appeared in various English periodicals during the Victorian period. You can view original facsimiles of these early editions of these beloved stories and see how they looked, chapter by chapter, to loyal fans and families for the very first time. While the site can be a bit tricky to navigate, it’s fun to explore—here’s the link if you’d like to take a peek!

So, what are some of your favorite Victorian novels? Did any of this information about the influence of the Industrial Revolution surprise you? Would you have enjoyed reading novels in serial form, or would it frustrate you to have to wait a month to read the next chapter? I’d love to hear your thoughts!
Posted by Anonymous at 12:30 AM