Historical Palestine, IL - A Town for Yesteryear and for Today 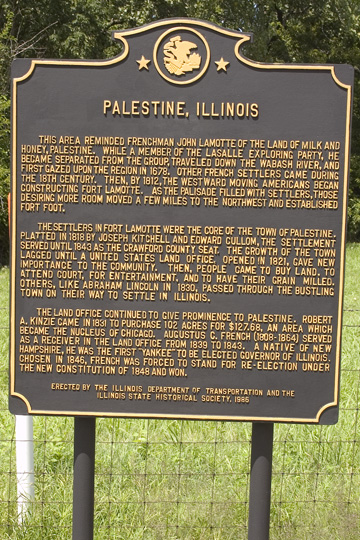 By the time this is posted, I will be on the road home from a very exciting weekend in Palestine, Illinois, site of the Pioneer City Rodeo. The same rodeo that is the setting for my book, Second Chance Love.

Ever since I began attending the rodeo over ten years ago, I’ve been amused by the signs posted at the entrances to the village that state: “Welcome to Historic Palestine, Illinois.” Curious as to what makes the town historic, I checked it out. The small town does have quite a colorful history—one they are proud of and celebrate.

Located along the western boundary of Illinois on the banks of the Wabash River, Palestine is surrounded by flat prairie land, which now contain corn and soybean fields. But back several centuries, the Illinois prairie stretched west for miles. Descriptions by explorers at that time include descriptions such as “a sea of tall grass.” After coming out of the thick forests that covered what is now Ohio and much of Indiana, it must have been a stunning sight. According to the town’s website, “When French explorer Jean LaMotte first gazed upon the region in 1678, he gave it the name Palestine as it reminded him of the biblical land of milk and honey.”

The town was chartered in 1811, and is one of the oldest communities in the state of Illinois. During the early 1800s many settlers entered the region, including Abraham Lincoln. He crossed the Wabash River at what is now Vincennes, Indiana, then turned north and walked along the river’s edge to eventually camp on land occupied by Palestine today. They stayed a short time, then moved on to Decatur, Illinois.

Early settlers who put down roots in Palestine, had to deal with harsh winters and building a town from scratch. Also, when the French settlers who came to the area in the 1700s encountered friendly Indians who traded with them, but with the rising tensions of the War of 1812, that camaraderie was broken. To protect themselves from unprovoked Indian attacks the newly arrived pioneers built Fort Lamotte. When warned of a coming attack, the settlers sought shelter in the fort until the danger passed. At one point, according to a historical marker set at the approximate location of the fort, "The pioneers farmed the adjoining land but stayed within easy reach of the fort's protective walls. After the War of 1812, the Indian attacks diminished and the inhabitants of the fort became the nucleus of Palestine."

In reviewing a number of old photos of Palestine, located through a link at the town's official website (see link below), it's apparent that with the coming of the railroad the village grew and prospered. In addition to the railroad the community also had a river port, grain mill, and train yard.

Today the railroad yard is gone, but Main Street still prospers with antique and gift shops, an ice cream parlor and other commercial establishments, including the ongoing restoration of the Fife Opera House that is located on the second floor of what is known as the Fife Building. Mr. Fife was an influential business owner in Palestine in the late 19th Century and early 20th Century. The first floor of his building housed his retail businesses, and an opera house was on the second floor. A special committee has undertaken the restoration project. Check out their website for some interesting facts about the opera house, including some original background scenery that has recently been found.

Even the rodeo event and the arena have a unique history. The first rodeo was held 51 years ago on an old baseball field. 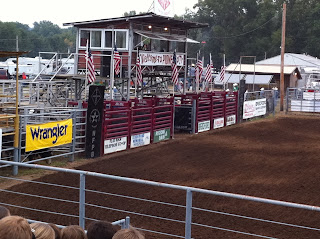 The wooden bleachers and lighting, left over from the field’s days as a baseball venue, were inadequate, but were okay temporarily. After a couple successful years of running the rodeo on the converted baseball field, the community came together and worked to build a new arena specifically designed for rodeo, complete with state-of-art lighting. It is deemed to be one of the finest rodeo arenas found in a community the size of Palestine. The photo from my personal photos taken by me shows the bucking chutes as they appear today. You can learn more about the rodeo at their website. 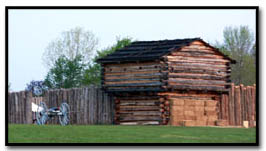 In 2006, the citizens of Palestine decided to commemorate the historical significance of Fort LaMotte and two other forts that were built near Palestine during the War of 1812, and a section of land was chosen next to the rodeo arena to erect a replica of Fort LaMotte. The finished project is pictured here.

Before construction began, they painstakingly researched the designs of such
forts from that era and worked to have the replica as exact to the original as possible. Every time I go to the rodeo I pass the replica of Fort LaMotte, and it always gives me pause as I am reminded of the hardships the early pioneers endured on the very same land. The surrounding grassy land becomes a parking lot during rodeo weekend, and there’s something both odd and telling to see a life-sized model of the old fort surrounded by large pickup trucks, SUVs, and cars.

Historical Palestine, Illinois may be small, but it is a town with a big heart that has been handed down from its earliest residents. If you ever find yourself in southern Illinois, you may want to pop in for a visit.

A native of Lake Geneva, Wisconsin, author Pamela S. Meyers lives in suburban Chicago with her two rescue cats. Her novels include Thyme for Love, Love Finds You in Lake Geneva, Wisconsin (out of print), Second Chance Love, and Surprised by Love in Lake Geneva, Wisconsin (a reissue of LFY in Lake Geneva, WI). She has also published two novellas, What Lies Ahead, which is included in The Bucket List Dare collection, and If These Walls Could Talk, which is included in the Coming Home collection. When she isn’t at her laptop writing her latest novel, she can often be found nosing around Wisconsin and other Midwestern spots for new story ideas. You can keep up with her on her at Facebook page or her website. She is also a monthly contributor at the Heroes, Heroines and History blog and at the Novel Rocket blog. 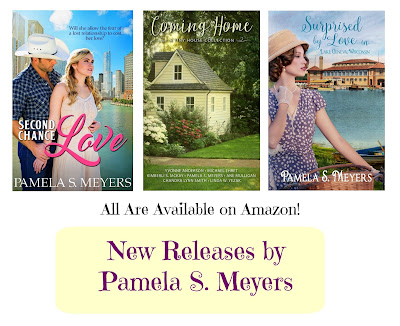