Amanda Berry Smith - The Slave who Became a Preacher 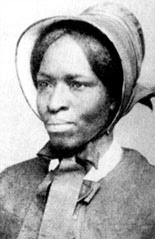 A black woman in 1800s America usually lived her life in slavery and obscurity. Even after slavery was abolished, a black woman’s prospects were even more limited than the prospects of a black man or a white woman. That is why Amanda Berry Smith’s story about becoming one of the most powerful and effective evangelists and missionaries of that time period is so compelling.
Amanda was born in Maryland as a slave, the oldest of 13 slave children. Her mother and father lived on adjoining farms. Her father worked hard and eventually was able to buy his family’s freedom. He moved his family to Pennsylvania to provide a better life. There he operated a stop on the underground railroad.
Although she had only three months of formal education, Amanda learned to read and write through the help of her parents. She took a job as a maid and wash woman to help support her family before marrying Calvin M. Devine in 1854.
In 1856, while Amanda was ironing, she went to her cellar to have it out with God, determined she would believe in Jesus Christ as her savior or die trying. She prayed, “O, Lord, if You will help me I will believe You.” God did help her, and she accepted Christ as her Savior and Lord determined to know God better and to tell others about him.
She became active in the Holiness movement, which urged all believers, regardless of their situation or status, to publicly share their faith. Smith was particularly attracted by the controversial principle of sanctification, the belief that purification from intentional sin is achievable through faith.
After her husband Calvin died as a Union soldier with an African-American unit during the Civil War, Amanda moved to Philadelphia in 1863 and married James H. Smith, a deacon in an African Methodist Episcopal church. She had two children by her first husband and three by her second, but only one daughter, Mazie, survived childhood.
Following her second husband’s death in 1869, Amanda felt called to preach. For nine years, she preached at AME churches and at Holiness camp meetings throughout the East and Midwest. She wasn’t ordained and received no financial support from the AME Church or other organizations. Her support came from donations.
In 1878, Amanda traveled to England to preach and then went to Africa and India as a missionary. She stayed in India for two years where she met James Thoburn, a Methodist Episcopal bishop and missionary who claimed he “learned more Christian truth from Amanda Smith than from any other person.”
In 1890, Amanda returned to America and moved to Chicago where she continued preaching. In 1893, she published An Autobiography, the Story of the Lord’s Dealings with Amanda Smith the Colored Evangelist. With royalties from books sales and other fundraising activities, she opened Amanda Smith Industrial Home for Colored Orphan Children in Harvey Illinois in 1899. She also wrote a monthly newspaper called The Helper which helped support the school.
The constant struggle to support the home caused her health to fail. George Sebring, a supporter and real estate developer gave her a house, and she retired to Sebring, Florida in 1912 and died in 1915. When she died, white ministers in Sebring acted as pallbearers to the train that would transport her body to Chicago. Her funeral on March 1, 1915 was one of the largest in the history of the African-American community in Chicago.
Even with the outpouring of love shown at her funeral, she was buried in an unmarked grave. In 1991, the Commission on the Status and Role of Women in Northern Illinois and the United Methodist Church placed a headstone on her grave. On April 23, 1991, the House of Representatives of the State of Illinois adopted a special resolution honoring the memory of her rare achievements.

Tamera Lynn Kraft has always loved adventures and writes Christian historical fiction set in America because there are so many adventures in American history. She has received 2nd place in the NOCW contest, 3rd place TARA writer’s contest, and was a finalist in the Frasier Writing Contest. Her Novel, Alice’s Notions and her novellas Resurrection of Hope and A Christmas Promise are available on Amazon and at Barnes and Noble.
Posted by Tamera Lynn Kraft at 12:00 AM