Recently, I attended a luncheon at East Central Community College (ECCC). The event was hosted by the Culinary Arts program and was part of the students' mid-term exam.

The students and their teacher, Mr. Karrh, prepared Southern cuisine from four different periods from our history: Muskogean, Colonial, Civil War, and Civil Rights, as well as shared people, events, and historical tidbits from each era.

Since there was so much to soak in, I'm going to divide this into four parts, posting about each era during the next four months.

I especially enjoyed the Muskogean and Colonial eras as that's when my current series, is set, in the 1790s.

Banaha, hominy, corn on the cob, fry bread, and molasses cookies were staples for the Muskogeans prior to the arrival of the Europeans in the Southeast. Fry bread is still cooked and eaten today in many homes of the Choctaw nation.

Directions
Pour enough boiling water over the meal and soda mixture to make a soft dough which can be handled with the hands.

Prepare 4 to 6 handfuls of corn shucks by pouring boiling water over them to cover, then strip a few shucks to make strings. Tie 2 strips together at ends.

Lay an oval shaped ball of dough on shucks. Fold carefully and tie in the middle with strings. Place in large stew pot and boil 30 to 45 minutes.

Pam's review of Banaha: I've never eaten Banaha, and it wasn't exactly my favorite dish on the menu. It was a bit grainy and bland as corn meal is apt to be. I didn't receive a list of the recipes from the event, so found the basic recipe online. Other ingredients can be added to change the texture of Banaha. In some ways, Banaha could be compared to an earlier, simpler version of "dressing" or "stuffing". Just add some boiled eggs and chicken broth. :)

I've had hominy maybe once in my life and wasn't fond of it, but the ECCC Culinary Arts students made me a fan by adding chicken to the dish. I didn't find a recipe that resembled the simple dish offered at the luncheon, but it was perfectly seasoned, possibly with just salt and pepper. But it was so good that one couldn't go wrong with a bit of butter. Of course, most of us would buy canned hominy if making this dish, but the Muskogean cook would have had to soak and cook field corn in a lye solution. Then she would boil the corn for several hours to loosen the hulls from the kernels, and soften the corn. For more detailed instructions on cooking hominy, go here.

Unfortunately, I didn't get to sample the fry bread, but since I live between two Choctaw reservations, fry bread would be fairly easy to get a taste of around here.

Now we get to the sweet part. Molasses cookies. What I remember about molasses cookies comes from an elderly lady name Mrs. Arletta who made what we called teacakes (not to be confused with the English teacake), but Mrs. Arletta's teacakes were similar to molasses cookies. From as young as six-seven years old, I can remember sneaking into her kitchen and reaching in her cookie crock to get one of her teacakes. I never, ever found it empty.

There are tons of recipes on the internet for molasses cookies, so take your pick.

However, I have a feeling that the 17th-18th century recipe was way simpler than the "Old-fashioned" recipes dotting the internet, and I simply can't imagine any of them tasting as amazing as Mrs. Arletta's did to a little barefoot girl on a sunny, summer day way down in Mississippi. 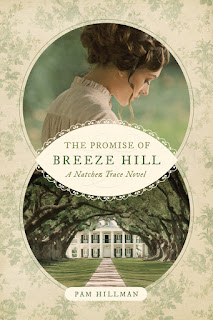 The Promise of Breeze Hill is set in 1791 Natchez Territory. With a wide range of characters with ties to the Spanish, French, British, Choctaw, African, and Irish, the food served would have been a bit more varied than what was available during the Muskogean era, and the serving pieces would be more in line with the Colonial era, but there would still be some offerings on the table, especially when the cook was part Choctaw, Chickasaw, or Natchez.

Join us next month on the 16th for a look into the Culinary Arts of the Colonial Era in the South.