Christmas on a Plantation

Christmas has come and gone once again. I hope you and yours had a wonderful day celebrating the birth of our Lord and Savior, Jesus Christ! As the author of historical fiction set on a Texas cotton plantation, I can't help but wonder about Christmastime back in the 1850s and what it was like for the occupants of the plantation, especially the slaves. Did their celebration include any of the traditions we enjoy today? Were they allowed to celebrate at all? A little research revealed some interesting tidbits I'd like to share with you.


If you were a white plantation owner, your celebration would include a huge feast with roasted turkey and goose, fish, venison, vegetables that were grown on the plantation, and all manner of sweets. A grand tree would be decorated, with wrapped presents beneath its boughs. Friends and family from neighboring plantations would be invited to share in the celebration, often staying overnight. Of course, house slaves would be there to serve you and see to your every need. A good time would be had by all.

Christmas in the quarter looked a bit different.

Like Rose Hill, the fictional cotton plantation in my book, The Planter's Daughter, southern plantations had dozens and dozens of slaves living on the property. A typical week for the slaves involved six days of hard labor, with Sunday being the only day they were allowed to rest, do laundry, and perhaps visit relatives on a neighboring plantation. When Christmas Day arrived, however, many plantation owners allowed their field slaves to not only have the day off, but some went so far as to give their slaves the entire week off. I found this a bit surprising, considering the very nature of slavery and the poor treatment slaves endured the rest of the year.

As it turns out, my suspicions may be justified. Frederick Douglass, a former slave who became one
of the most famous black leaders of his day, wrote in his narrative:

From what I know of the effect of these holidays upon the slave, I believe them to be among the most effective means in the hands of the slaveholder in keeping down the spirit of insurrection. Were the slaveholders to abandon this practice, I have not the slightest doubt it would lead to an immediate insurrection among the slaves. These holidays serve as conductors, or safety-valves, to carry off the rebellious spirit of enslaved humanity.

Unfortunately, he was right. Some masters used Christmastime and the promise of food, gifts, and time off to ensure obedience throughout the year. Any hint of rebellion or escape could result in the loss of holiday privileges or even a cancellation of Christmas entirely. Escape was always on the minds of the slaves and the slaveholders, and Christmas often presented the perfect opportunity to leave the plantation. Passes were sometimes issued as gifts, watchmen were occupied, and normal routines were interrupted. Harriet Tubman, the woman who escaped slavery and eventually helped many others to freedom using the Underground Railroad, helped her two brothers escape during Christmas one year. Their master intended to sell them after the holiday, so Harriet risked her own freedom and led them in a journey north, eventually making their way to Canada. 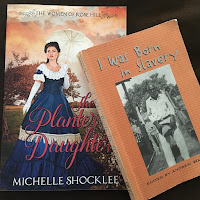 While writing The Planter's Daughter, I relied heavily upon an incredible research book titled I Was Born in Slavery. (To read my post about this little treasure, click here.) True narratives of life as a slave in Texas, many of these former slaves shared memories of Christmastime on the plantation. Millie Ann Smith was born a slave in Rusk County, Texas in 1850. She recalled that on Christmas Day, "Master would fetch us down flour, syrup, sugar, and fresh meat so we could have gingerbread cake." James Boyd recalled the "big dance" they would enjoy at Christmastime with music and singing. If the master was generous, a hog would be killed and set to cook in a pit in the quarter. Gifts were usually new clothes, shoes, food , hand-me-down toys, and even coins and were handed out by the plantation owner or a member of his family. Alcohol was also plentiful on some plantations, and some unscrupulous masters encouraged their slaves to drink heavily as a form of entertainment for the white people.

Many "marriages" took place during Christmastime on a plantation. Perhaps it was the festive atmosphere or the relaxed work schedule, but whatever the reason, many slaves chose to marry (not legally) during this time. Depending on the relationship between the slave and the master, some ceremonies were conducted inside the plantation home, often with the master of the house presiding.

It's easy to understand why the slaves looked forward to Christmas. Although they were subjected to the evils of slavery day after day, some managed to find real joy in the celebration. Former slave Charley Hurt said Christmas was the one day he was happy and could forget he was a slave. I can only hope he and all the others truly understood the source of that happiness and the real freedom we find in Jesus Christ.

Michelle Shocklee is an award-winning author of historical fiction and is a contributor in six Chicken Soup for the Soul books. The Widow of Rose Hill, Book 2 in the historical romance series The Women of Rose Hill, releases February 12, 2018 and is available for pre-order on Amazon. Book 1, The Planter's Daughter, is available now.