First, let me say, this year has flown by! This month marks my first anniversary of blogging here at Heroes, Heroines, and History! It's been such a pleasure getting to know both the readers here and my fellow bloggers better!

Second, winter is upon us here in Minnesota, though as I write this, the temperatures are rather moderate. However, snow is always on the horizon here in the North Star State anytime after Halloween.

Which thought brings us to our next stop on the tour of Minnesota historical sites: The Forest History Center.

Why does winter remind me of the Logging Camp? Because Logging in the Northwoods is a winter-time activity.

The Minnesota Historical Society operates The Forest History Center in Grand Rapids, Minnesota (The birthplace of Judy Garland!) to preserve the history of logging and forestry in the state.

When you visit, you will step back into the early 1900s and be greeted by historical re-enactors in the roles of bull cook, tool sharpener, lumberjacks, and clerks. You'll be introduced to the foreman, known as "The Push" and the stablemen and their draft horses.

Touring the bunkhouse will make you glad you don't have to sleep three to a bunk and deal with the miasma that housing twenty or thirty sweaty, woolen-clad men in a small space would bring about.


You'll meet the camp "Dentist" who won't give you a root canal, but who will sharpen all the saws and axes in camp. A cross-cut saw takes about an hour to sharpen, and there were usually twelve saws to sharpen each night. 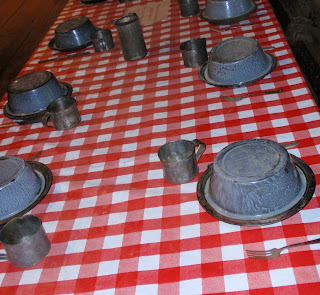 The cook reigned supreme at a logging camp, and his rules and word were law. You'll be introduced to a creative vocabulary of food terms used nowhere else on earth. For example:

Monkey blankets = flapjacks (There are a lot of terms for flapjacks!)

If you're up for a bit of a stroll, you can follow the path from the camp down to the Mississippi River and explore the "Wanigan," a sort of floating cookhouse that traveled with the loggers when they floated the winter's haul down river in the spring. The wanigan was where loggers could catch a meal, a nap, or get a bit of first-aid.

Vast stands of red and white pine used to cover the northern half of Minnesota, a seemingly endless supply of timber. The logging of white pine in Minnesota began in 1839 with the first sawmill built along the St. Croix River. Peaking around 1900, soon the slash and burn method of logging dwindled the supply and quality of white pine, driving up the price. The last river drive of logs happened in the spring of 1939.

Today, less than 2% of Minnesota acreage is virgin red and white pine forest. However, there is one forty-acre plot of land that survived the logging boom. Located in the Chippewa National Forest, east of Blackduck, MN, forty acres of virgin pine forest still stand due to a platting error. Several different logging companies assumed the land was owned by someone else, and therefore didn't harvest the trees there. (It was a serious offense to poach trees off someone else's land!) As a result, forty beautiful acres of trees, some more than three hundred years old, still stand!

You can learn more about The Forest History Center and Logging in Minnesota by visiting the Minnesota Historical Society Website. 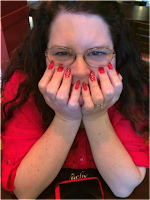