I’ve been fascinated with nutcrackers and the story behind the ballet since I first heard the music many years ago. I decided to find out more about these beautiful Christmas decorations, and learned some interesting facts.

Before the beautiful nutcrackers were created by wood carvers in France and England, they were simple tools consisting of two pieces of wood fastened by a leather strap or metal hinge. Nuts were a common item in Europe, and by the 15th century, the nutcracker became an elaborate tool carved by great woodcrafters.

These early crafters used wood from around their locality, but boxwood was the wood of choice because of its grain and color. Many of these early 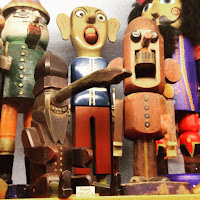 carved nutcrackers can be seen on display at the Leavenworth Nutcracker Museum in Washington. Here is a picture of the more unusual ones.

By the 18th and 19th centuries, craftsmen in Austria, Switzerland, and northern Italy were carving nutcrackers in the likenesses of animals and humans. 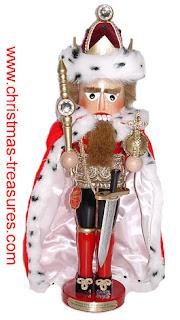 In German folklore, stories can be found telling how nutcrackers were given as keepsakes to bring good luck to the family and protect the home. Legend says that nutcrackers guard the home from evil spirits and serve as a messenger of good luck and goodwill.

This is the saying surrounding the legend of the nutcracker:
“Don’t be afraid, my beard is long, my head is large, my look is grim but that matters not. I won’t bite you. In spite of my big mouth and grim appearance, I look with my heart for your happiness.”

Nutcrackers were thought to embody the “Cycle of Life” because as the seed of a nut fell to the ground, it rooted and grew into a strong tree producing more nuts and provided wood for the craftsmen. They held a feast celebrated just before harvesting the logs of the Elder trees. At the feast they ate the nuts as if to pass on the magic of the eternal cycle.

Nutcrackers also reflect ancestral dining customs and were carved into whimsical shapes to become part of the social setting and provide conversation pieces for guests as they lingered over dessert.

E.T. Amadeus Hoffman wrote a novel, The Nutcracker and the King of Mice, sometime between 1776 and 1822. Tchaikovsky took the story, set it to music in the magnificent Nutcracker Suite. The ballet with the music debuted in St. Petersburg in 1892 and has become a Christmas tradition around the world.

A family of artisans, the Steinbach family, has 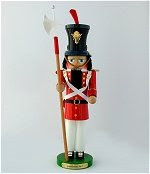 produced fine wood products for over two centuries. Five generations have kept the business nutcracker carving and manufacutre going with the sixth generation being trained even now. The factory is now located at Hohenhameln in northern Germany. On the right is an example of a Steinbach creation. This one costs over $200.

They were the first to come up with the development of the limited edition nutcracker fashioned after King Ludwig II. The response was overwhelming and contributed to the collectability of the nutcrackers and increased their value.

Nutcrackers finally made their way to America in the late 1940’s and early 1950’s after service men stationed in Germany found them and brought them home. A passion ignited for these wonderful creations as the ballet captured the imagination of people and sparked a desire to collect the nutcrackers we know in the costume of soldiers and kings of earlier centuries.

Nutcrackers in the form of soldiers and kings first appeared in German in the late 1700’s and early 1800’s. In 1872, Wilhelm Fuchtner made the first commercial production of nutcrackers using the same design for many different figures. The Leavenworth Nutcracker Museum displays an 1880 miner of Fuchtner along with miners made in today’s Fuchtner family workshops.

Today, soldier and king nutcrackers are manufactured in Germany to meet the high demands 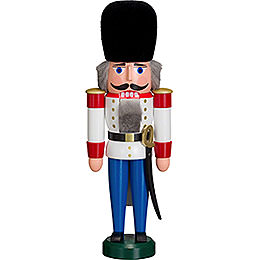 of collectors. These are expensive, authentic nutcrackers and can be purchased only from the company or from stores which feature nutcrackers by these German crafters.

My own collection of nutcrackers began with one I purchased in Oberammergau in 1994. Here's a picture from the store there. I fell in love with this place. 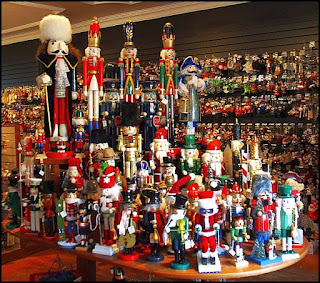 Nutcracker reproductions can be found anywhere at Christmas time in many sizes and designs. When compared side by side, the craftsmanship of the authentic nutcrackers is evident. That doesn’t keep us from collecting nutcrackers from stores all over our country. 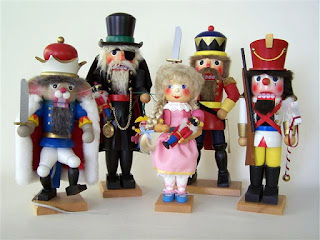 Nutcrackers based on the characters from the ballet are popular and sold at the productions. Here are Clara, her uncle, the Mouse King, the Nutcracker and one of the soldiers.

I have two nutcrackers from Germany, but the others have been purchased at the Nutcracker Ballet Christmas Market and other stores at Christmas time. 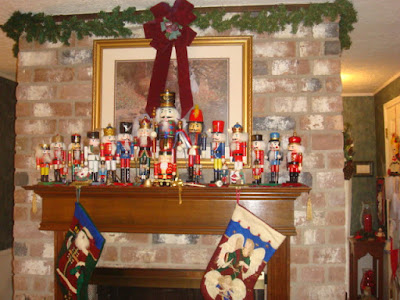 The museum at Leavenworth, Washington is a place worth visiting if you are in the area. Below are links to the museum and to information about the Steinbach family. 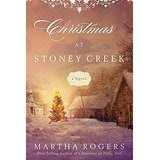 I'm giving away a copy of my Christmas book, Christmas at Stoney Creek.
News reporter Tom Whiteman befriends a homeless man, Joe, and brings him home to Stoney Creek. Tom’s journalistic instincts suggest there’s more to the old man than appearances tell. A carpenter by trade, Joe works at odd jobs around town and makes many new friends including Faith Delmont, a girl who grew up with Tom. Contradictions in the man’s manners and way of speaking whet Tom’s nose for news and raises even more questions. As he and Faith seek the truth, they learn that God’s love can turn tragedy and loss to triumph and true love comes to those who seek it.

Answer one of these questions and be entered. (Sorry, US readers only) Please be sure to include your email address with your comment.

Have you ever seen The Nutcracker ballet?
Nutcrackers are a collector item. Do you have any special Christmas collections?

Martha Rogers is a free-lance writer and multi-published author from Realms Fiction of Charisma Media and Winged Publications. She is a member of ACFW and writes the weekly Verse of the Week for the ACFW Loop. She is a retired teacher and lives in Houston with her husband, Rex.
www.marthawrogers.com