Hello everybody. Welcome to Part IV and my final post from the Culinary Arts Luncheon I attended last fall. Parts I, II, and III focused on the Muskogean Era, the Colonial Era, and the Civil War Era.

Today's post moves us into the 20th Century and the Civil Rights Era. The Civil Rights Era from the 1960s, some fifty years ago, but the foods chosen to highlight that era at the luncheon are still foods that Southerners enjoy today.

I'll admit that I didn't sample much of these dishes as we had SO much food to taste, choosing to focus on those dishes I'd never heard of. 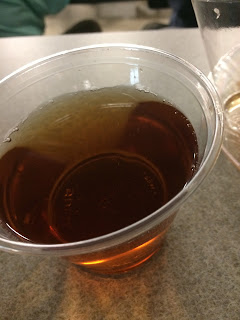 And Sweet Tea, y'all!

Most of these dishes can be found on many menus in the south and any potluck or church social wouldn't be complete without fried chicken, fried okra, butter beans, cornbread, field peas, and the aforementioned banana pudding.

But, just as all banana puddings aren't the same, neither are all fried chicken, okra, or even cornbread. I won't pretend to be a great cook, but I know some great cooks.

My mother, my mother-in-law, all the grandmothers had their specialties. I've already mentioned my mother-in-law's banana pudding. My mother makes an amazing chocolate pie with "calf slobber" on top. What's that, you say? That's egg-white meringue beat to peaks, then very lightly browned. Sorry, didn't mean to gross anybody out! lol

My husband's grandmother passed away this past year and she was an amazing cook. But I especially loved her cornbread. She'd preheat the oven, then heat an iron skillet on the stovetop with an unhealthy dollop of lard, mix up a batch of cornbread, then drop the cornbread mixture by spoonfuls into the hot grease. Once it was all in the skillet, she'd put it in the oven to finish baking. Best cornbread ever!

But here's something on the Civil Rights Era menu that I wasn't familiar with. Tomato Pickles. There are as many recipes for tomato pickles as there are varieties of pickles. The simplest is just tomatoes, apple cider vinegar, and spices.

So, there you go. A list of Southern foods that were served with abandon 50 years ago, but are still solid savory fare found on tables today.