For thirty years, large-scale child abduction was carried out in Memphis, Tennessee, thanks to a woman named Georgia Tann and her political connections who benefitted from her child-selling business.

Hiding behind the pretense that she was rescuing poor, neglected children, Georgia Tann was lauded for her innovative social work. Only her accomplices and the people who had their children taken away from them knew the truth. But for almost thirty years, Tann became wealthy by stealing over 5000 children and selling them to adoptive families at exorbitant fees. 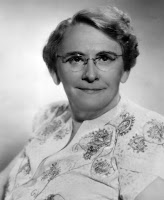 Georgia Tann told the public she was giving the children a chance for a better life, for education and opportunities they never would have received at the hands of their natural parents. But these kids were stolen – from hospital nurseries, as they walked home from school or even as they sat on their own front porches. Often a birth mother was told her child had died at birth, never knowing the child had been given to Tann.

Those parents who discovered their child had been taken by Tann had no recourse to get them back. Tann told them the children had become the property of the Tennessee Children’s Home Society, and most of these were too poor to pursue Tann in court. Those who tried ran into another roadblock – Judge Camille Kelley, who was a friend of Tann’s and probably getting a cut in the profits. Kelley would take Tann’s side and sign the children over to the woman. Another one of Tann’s friends was the corrupt Memphis politician, E.H. “Boss” Crump, whose pockets she lined.

Tann’s favorite “products” to sell were blonde, blue-eyed children. She purchased newspaper ads displaying photos of these children, advertising them for adoption as though they were puppies or kittens. 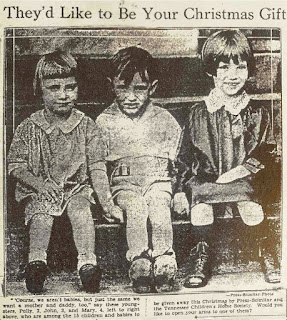 The adoptions were closed and secretive, preventing adopted children from ever learning the identities of their birth parents. New documents were created changing the children’s names, and other information about the child and its parents was fictionalized. Tann believed children were “blank slates” who could be made into any kind of person the adoptive parents wanted to change them into.

In the state of Tennessee, the standard rate for adoption was $75, so Tann found her greatest resource selling children across state lines, especially to the wealthy in California who paid as much as $5000 per adoption. Several well-known actors and actresses adopted their children from Tann’s adoption society.

It is believed that most of the adoptive parents did not know the truth about Tann’s black market of children. No doubt if they had, the operation would have been shut down long before it was. Former victims of Tann’s kidnapping have testified to the abuse and starvation of the children kept in the home. More than 500 children are thought to have died as a result, but no proof was found.

When Crump’s popularity declined, and a new governor and Crump rival was elected in 1948, Tann’s business began to unravel. The new governor got wind of the “baby racket” and ordered an investigation. However, Tann was only charged with pocketing money from state-funded associations instead of kidnapping, and she died from cancer in 1950, never having to pay penance for her crimes. Her co-conspirators died just a few years later. And most of the children taken never found out who their birth parents were.

I discovered Georgia Tann’s notoriety by reading Lisa Wingate’s best-selling novel, Before We Were Yours. Lisa’s book tells the story of several children taken from their home on a houseboat by Tann’s people.

Lisa is giving away a copy of Before We Were Yours to one of you who enters the drawing by leaving a comment (with their email address).

Marilyn Turk lives in and writes about the coast and people who lived there. Her books include Lighthouse Devotions, Rebel Light - a Civil War love story, and The Gilded Curse - a World War II romantic suspense. The sequel, Shadow of the Curse, will release July 2018. Connect with her at www.pathwayheart.com.
Posted by Marilyn Turk at 12:30 AM