Susan Page Davis here. What are thought to be the first ransom notes in American history are the ones written after Charley Ross was kidnapped on July 1, 1874.


Charley, age 4, and his brother Walter, age 5 or 6, were playing in the front yard of their family’s home in Germantown, Penn., an upper scale section of Philadelphia. A horse-drawn carriage pulled up, and the boys were approached by two men.


The men offered the boys candy and fireworks if they would take a ride with them. Charley and Walter agreed, and they drove to a store in Philadelphia. The men gave Walter twenty-five cents and told him to go in and buy some fireworks. When he came out, the carriage, and his brother, were gone.


The boys’ father, Christian K. Ross, owned a large house and was thought to be wealthy, but he was actually deep in debt after the stock market crash of 1873. He went to the police, and Charley’s kidnapping became national news.


The first ransom note appeared three days after Charley was taken. The notes Christian Ross received were mailed from post offices in the area. They contained many misspellings. The first read in part, “You wil have to pay us before you git him from us, and pay us a big cent to. if you put the cops hunting for him you is only defeeting yu own end.”


A second note read, “This is the lever that moved the rock that hides him from yu $20,000. Not one doler les - impossible - impossible - you cannot get him without it.” More than twenty notes were received over the next few months.


Twenty thousand dollars was a huge amount of money at that time. Christian Ross didn’t have it. The kidnappers continued to send notes, threatening Charley’s life if they were not paid.
Some prominent Philadephians wanted to help the Ross family. Pinkerton detectives were hired to search for him. Flyers and posters with Charley’s picture on them were widely distributed.


Sources disagree on whether the ransom was raised or not. Some say several attempts were made to give it to the kidnappers, but each time, the culprits failed to appear and claim it. Others say that Christian Ross refused to pay the culprits, for fear it would encourage a tide of child abductions. Either way, the kidnappers stopped communicating with Charley’s father after a while.


A break came in the case five months after the kidnapping, when two men were shot while burglarizing a house in Brooklyn. Bill Mosher was killed. The second robber, Joe Douglas, was fatally wounded. Before he died, he said that he and Mosher had kidnapped Charley Ross. The witnesses disagreed on what the dying man said after that. Either he said Charley had been killed, or Charley was still alive. No one is sure, but the parents’ hopes were raised.


Charley’s brother, Walter, was taken to New York to identify the bodies of Mosher and Douglas. He confirmed that they were the same men who took him and Charley the previous summer. One way he was able to identify Mosher was by his malformed nose. Walter had described it to the police earlier as a "monkey nose."


The only arrest in the case was that of William Westervelt, who was known to associate with Bill Mosher. He was tried in 1875. While in prison before the trial, he stated that Charley was alive at the time Mosher was killed, but this was never proven. Walter Ross insisted that Westervelt was not one of the men who kidnapped him and his brother. The kidnapping verdict was not guilty. Westervelt was convicted of conspiracy, however. He served six years in prison, but maintained he was innocent and did not know where Charley Ross was. 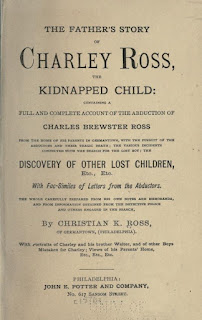 Two years after Charley was kidnapped, his father published a book, The Father’s Story of Charley Ross, the Kidnapped Child. He hoped the proceeds would raise money to help him continue looking for his son. The case drew great and publicity. Christian Ross later reprinted the book and gave lectures to keep awareness of his son’s plight going. He and his wife kept searching for Charley until they died, Christian in 1897 and his wife in 1912.


In spite of the family's lifelong efforts, they were never able to find Charley. They received many letters and tips, and they interviewed hundreds of boys, and later teenagers and grown men who claimed to be Charley. Reports say all were proven to be impostors.


In 1924, on the fiftieth anniversary of the crime, news stories ran recapping the case. Walter Ross, who was a stockbroker, was interviewed. He said that he and his three sisters still received letters from men claiming to be their brother.

The most successful claimant was Gustave Blair, who in 1934, aged 69, lived in Phoenix, Arizona. He petitioned a court to recognize him as the real Charley Ross. He claimed he was abducted as a child and eventually adopted by a man who told him that he was Charley Ross.
Walter Ross would not even consider Blair’s claim. He said, “We’ve long ago given up hope that Charles ever would be found alive.” But he didn’t contest the claim in court, and the judge ruled that Blair was “Charles Brewster Ross” in 1939. The Ross family refused to recognize him as Charley. Blair continued his claims until his death in 1943, and at one point tried to sell his life story to a movie studio without success.


During the early days of the case, two popular song were inspired by the crime. Published in 1874, “Bring Back Our Darling,” was penned by Dexter Smith with music by W.H. Brockway. The sheet music bore the overline, “Dedicated to the Bereaved Parents,” and a picture of “Little Charlie Ross” graced the front. A second song, “I Want to See Mamma Once More: The Words of Poor Little Charlie Ross,” also appeared about this time. It was written by George Cooper, with music by E. Mack.


The common admonition "don't take candy from strangers" is said to have come from Charley Ross's abduction. Also, the Charley Project, a major missing persons database, is named for Charley Ross.

Leave a comment below to be entered in a drawing to win one of my historical mysteries, The Crimson Cipher, set in 1915.