St. Mark’s Lutheran Church stood proudly at the turn of the century on 6th Street in Manhattan’s Lower East Side, offering sanctuary for the German immigration population. The close-knit community anticipated their annual tradition, a summer outing to Locust Grove picnic grounds on Long Island, for which they had commissioned The General Slocum. The day of June 15, 1904 shimmered over the waters of East River under a bright sun with the promise of an escape from the city heat. Over 1500 tickets had been sold to the women and children of the congregation, while dutiful fathers and husbands remained behind at their laboring jobs.

Over a century has passed since that fateful day excursion, and the names and stories have almost passed from knowledge. But the maritime tragedy of the General Slocum rivals that of the Titanic, and in fact, until 9/11/2001, it marked the highest loss of life from a single event in New York City. 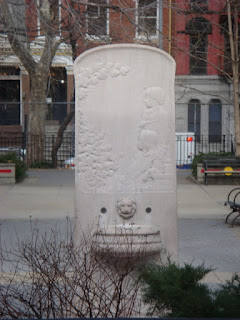 Tompkins Square Park fountain,
built as a memorial monument to the General Slocum disaster.
The inscription on the side reads: "IN MEMORY OF THOSE WHO LOST THEIR LIVES IN THE DISASTER TO THE STEAMER GENERAL SLOCUM JVNE XV MCMIV"
The inscription on the front reads: "THEY WERE EARTH'S PUREST CHILDREN, YOUNG AND OLD"
Manhattan, New York City
A decade before the turn of the century, the side-wheeling steamer was christened for a famous New Yorker, Union General Henry Warner Slocum, who in later years after the Civil War served in the House of Representatives. By all accounts, the charter boat was a popular choice for passengers traveling from the city for recreation. But its fourteen years of service had taken a toll on its upkeep. Painted crisply to maintain its appearance, the façade of ship-shape would prove a key element of the day’s tragedy as the voyage departed from the East River’s 3rd Street pier.


The paint itself, applied in thick layers over the boat’s exterior, proved extremely flammable. It also fused the six lifeboats to the deck. The inspection the boat had earlier that spring indicates the corruption common at the time, where a passing report might be procured with a wink and nod for the right price. To make matters worse, the fire hoses had suffered rot, and subsequently burst when called upon. A fire started in a storage room filled with straw, rags, and lamp oil, as the boat passed 83rd Street.  A boy reporting the fire to Captain Van Schaik was reportedly told to mind his own business. The crew was sent to extinguish the blaze, while the captain averted course from professional firefighters waiting at a dock, turning instead toward a small island in the East River. Later accounts claim his decision was made hoping to prevent the blaze from spreading through the city. This was perhaps the singular fateful decision for the 1300 souls aboard. The General Slocum ran aground on rocks just off 90th Street, and the conflagration consumed the vessel as 1,360 women and children scrambled for their lives.


2000 life preserving jackets, once filled with buoyant cork, were dispensed in the chaos, and their wearers jumped into the currents believing they would be saved. But a decade had rotted the cork to sawdust, which quickly saturated, and pulled their victims to the depths. 1,021 souls perished that day. Whole neighborhoods had lost their women and children, teachers, and Sunday School helpers. When the men returned from work later that day, they would find empty homes and bereft lives.

The Knickerbocker Steamship Company, who owned the General Slocum, was charged with negligence. The US Steamboat Inspection Service chief was fired by President Teddy Roosevelt himself. But the families of the victims never received compensation, and only one man was jailed, the captain, and then, only for three years. Still, sweeping changes were made in safety measures as a result of this tragedy. Another lasting result of the burning of the General Slocum was a complete change in the demographic of Lower East Side Manhattan. After the decimation of so many families, the neighborhoods gradually filled with Eastern Europeans, particularly Jewish immigrants. I recall my mother’s stories of her grandmother, born Catherine Ann Meeghan, who recounted this event to my mother as a child. Catherine Meeghan lived near little Germany, or Kleindeutschland on Manhattan’s lower East side at the turn of the century with her husband William Lee and family. Though Irish Catholic and somewhat separated by language and culture barriers, my great-grandmother befriended many of the families who would later suffer in the tragedy. In the aftermath, she was called upon by a distraught gentleman who asked her to identify a body pulled from the river —presumably his wife— because he couldn’t bring himself to do it. Hers was the sad task of affirming that his beloved wife had perished among the others.
She related that most of the remaining families moved, presumably to be near Lutheran Cemetery, their loved ones’ final resting place. She told of the place where the fire occurred—Hell’s gate—a turbulent and unpredictable stretch of water where the East and Hudson Rivers meet in swirls of incoming and outgoing tide. On June 18th, 154 funerals took place, and on that day, there were no Lutherans or Catholics, only neighbors held together by shared grief and a common faith in the Resurrection.