A Brief History of Dogs in America

Since this is February, the month of Valentine's Day, I just had to talk about one of my lifelong love affairs--with dogs! From the time before I could verbalize, I seemed to be able to speak canine body language enough to communicate my need to be part of the "pack." My first dog, Apollo, a Labrador Retriever mix, though named for the Greek god of the sun, surely had the patience of a saint to endure my childish poking and prodding. Perhaps he was well named after all, as the Greeks considered Apollo the patron defender of herds and flocks as well. He looked after me from the time I was born until I was old enough to look after him. 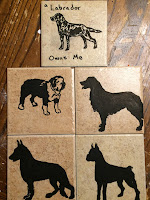 When poor Apollo parted this earth, my search for a new canine companion led me to a fascination with the many breeds and their uses and history. I would read anything I could get my hands on from the public library concerning dogs (and horses), so my mother decided to take me to the Cornell Veterinary school open house that year. It was there I acquired a chart of all the AKC (American Kennel Club) breeds recognized at the time--1979 to 1980. Every night I studied the chart until I had memorized the look and purpose and distinguishing characteristics of each breed. In my ten-year-old heart I vowed I would own each of my favorite breeds in my lifetime. And I had a lot of favorites! (Hate to break it to my younger self, but I'm not on course to fulfill this vow. Unless I live to be a couple of hundred years old or win the lottery and have a staff to help me groom, exercise and house all these darlings.)

This is by no means an exhaustive list, but the historical writerly side of me feels compelled to share the history of popular breeds in America and when they became so, as well as some antiquated notions of the care and upkeep of dogs from a book written in 1879, one hundred years before I started my search, The Classic Encyclopedia of the Dog by Vero Shaw. 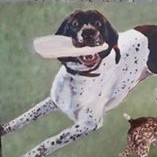 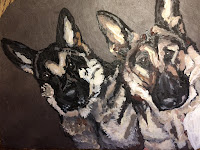 There are currently 190 recognized breeds in the American Kennel Club. According to the last five years of AKC registrations, the top 20 most popular breeds have stayed basically the same: Labrador Retrievers, German Shepherd Dogs, Golden Retrievers, Bulldogs, Beagles, French Bulldogs, Poodles, Rottweilers, Yorkshire Terriers, Boxers, German Shorthaired Pointers, Siberian Huskies, Dachshunds, Great Danes, Doberman Pinschers, Australian Shepherds, Mini Schnauzers, Pembroke Welsh Corgis, Cavalier King Charles Spaniels, and the Shih Tzu. Note, this does not reflect numbers of dogs by population, just the ones registered with the AKC.  I would guess that by sheer number, the most popular breed is the "pit bull" which can either be of American Staffordshire Terrier or Staffordshire Bull Terrier derivation. 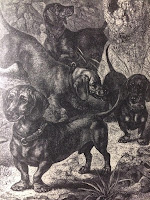 The American Kennel Club was founded in 1884, though other dog breeding enthusiast clubs predate it, as well as certain modern-recognizable breeds.
The earliest dog breeds (that still exist) in North America include the Newfoundland, a working water dog since the late eighteenth century. One theory believes Newfs developed from giant Viking bear dogs brought over in 1000 A.D. Another theory dates them to the fifteenth century, the product of mingling native breeds with explorer's dogs. Lewis and Clark had a Newfoundland as a companion on their legendary journey named Seaman, who's exploits of chasing away bears and escaping Indian captivity are equally legendary. The painter Sir Edwin Henry Landseer depicted the black and white coat variation of the breed in his famous domestic portraits.
The Chihuahua is also an ancient native, arguably the oldest, breed still recognized, dating back at least 500 years. The Bloodhound, the Harrier, Basset Hound, the lamb-like Bedlington Terrier,
Borzoi (referred to then as Russian Wolfhound), 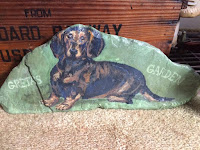 Not only did breed trends and preferences change, but the appearances of the breeds themselves transformed over the past centuries. One of the most dramatic changes is seen in the Munich, Germany-developed breed, the Boxer. Originating in the late 18th century, it was a hunting dog used on wild boar, bear, and deer. It is a Mastiff breed, of the Bullenbeisser lineage, literally translated "bull biter." The dogs of a century ago bear a notable difference to the modern breed standard in that the exaggerated brachycephalic profile in today's Boxer is missing. The short nose of one hundred years ago has been shortened even more drastically and some say, to its peril. Since dogs cannot sweat, but rely on panting to rid the body of excess heat, the trend in shortening noses is argued to put dogs at greater risk of heatstroke and respiratory issues. The old Boxer is generally heavier with a less pronounced "tuck up"--the deep chest tapering to a thin abdomen--as well. Pugs have seen a similar transformation.

So where were the Labradors, the German Shepherds, and the Golden Retrievers in early America? They didn't exist as a breed yet, or in the case of the GSD were not brought over to America in great enough numbers to be recognized until the twentieth century. This is a sticking point in my OCD when I read stories where someone has a breed a hundred years ago that simply wasn't around in America yet. Of course there is always artistic liberty. The most ancient breed known is the Pharaoh Hound, a sighthound virtually unchanged for millennia. Though not registered with the AKC until 1983, it is conceivable to create a situation where examples of this breed could have been imported at any time in our country's 242 year history, or even prior. Writers, know your breeds!

Flea treatment in 1879 looked different from modern acceptable practice. According to Vero Shaw's book, a dog with fleas would be rubbed from nose to tail with oil, which should be left on for hours until it "completely settles the fleas." Then the oil would be washed from the dog in water mixed with carbolic acid. Bedding and kennels would be kept meticulously clean to prevent infestation, the walls whitewashed or lime-washed.

The treatment of bites and the supposed avoidance of rabies was a truly frightening prospect. One "cure" proposed is to rub "Lunar caustic" into the bite, "at once and thoroughly." The author goes on to say "it will cause considerable pain and subsequent inflammation." Sounds to me like an invitation to receive a bite! Another treatment is forcing the dog into a hot salt water bath and keep it there for several minutes to "draw the poison." If all else fails, apply a poultice of carbonate of soda paste. The author swears one of his acquaintance's dogs, bitten by a rabid animal, received this treatment and lived for many years with no adverse affects. Can I just say, yikes!?. The rabies vaccine for humans made its debut shortly after this time, developed by Louis Pastuer and Emile Roux in 1885. An improved version debuted in 1908.