Growing up in Santa Fe, New Mexico, I heard much about the Santa Fe Trail. Each time my family climbed into our station wagon to visit my grandparents in eastern New Mexico, our journey took us, in part, along the old Santa Fe Trail. Spanning 1,200 miles and crossing five states, the Santa Fe Trail began in Franklin, Missouri, and ended at the now-famed plaza in downtown Santa Fe. Near Fort Dodge, Kansas, the trail split, offering travelers the choice of taking either the Mountain Branch or the Cimarron Cutoff. Both routes had its problems and dangers, depending on the weather and the time of year. I often wondered who those early pioneers were and why they would risk life and limb to travel in covered wagons, leaving ruts in the ground that are still visible all these years later. 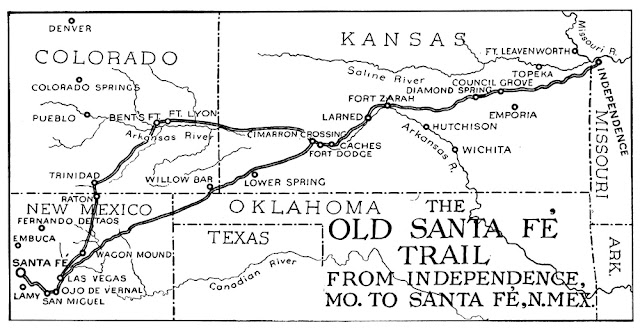 In To Heal Thy Heart, my novella in the recently released The Mail-Order Brides Collection, Phoebe Wagner, our heroine, travels from Kansas City to Santa Fe and then into northern New Mexico to meet her mail-order groom. Although I don't include her journey in the story, I did spend considerable time imagining everything Phoebe would have experienced upon leaving Kansas City to embark on the dusty 700+ mile trip that would take her over the Santa Fe Trail.

By 1866, the year Phoebe leaves Kansas City, a stagecoach could make the trip on the well-traveled
road in approximately two weeks. But when the trail first opened in 1821, it took two months or more, depending on the type of wagon and animals used, as well as the amount of freight, goods, personal belongings, weather, and unforeseen delays such as illness or even Indian attacks. Phoebe's journey, although long, dusty, and exhausting, was much easier than those early travelers who took to the trail, headed to a land that was still owned by Mexico.

In September 1821, William Becknell and five of his associates struck out from Franklin, MO, and started west. While we'd like to imagine Becknell as an insightful trailblazer, the truth is a little less heroic. Becknell, known as the Father of the Santa Fe Trail, was deep in debt and needed money. His timing, however, couldn't have been more perfect. Mexico had just declared its independence from Spain, and the residents of Santa Fe were eager to purchase the variety of goods Becknell brought in on pack horses upon reaching the mountain village on November 16. His second trip was even more profitable. Bringing with him an estimated $3,000 worth of goods, the Becknell party returned to Missouri with a whopping $91,000. In 1825, he helped surveyors hired by Congress map out the route, opening the Santa Fe Trail to any and all who had the courage to travel its length.

Harriet Bidwell Shaw was one such person. The wife of a Baptist missionary, she and her husband traveled across the Santa Fe Trail in 1861. She chronicled their journey in a diary, which is pure gold to a history lover like me. Her telling of one night on the trial made me smile:

"Milton gathered some sticks and made our tea while I prepared our bed in the carriage and committing ourselves to the care of our Heavenly Father felt safe and tried to sleep but could not much on account of mosquitoes which annoyed me constantly." 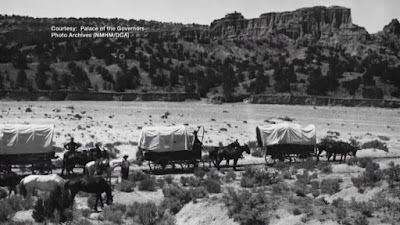 Harriet, as well as other pioneers, wrote of dust, trouble with Indians, animals dying, broken wagon axles, storms, buffalo hunts, and cooking over campfires. She never seems to wallow in her circumstances, but one of her disappointments was traveling on Sunday's. "No Sabbath for us," she wrote several times. She described seeing thousands of buffalo "scampering over the plains in all directions" as well as wolves.

"It was a beautiful moonlight evening & [Milton] felt very much in a hunting mood as wolves were very thick – I protested against it but he felt so much inclined to go that he took his gun and went off – saying that he would not be gone long – I felt very uneasy about him – but he soon returned, his hunting mood I suppose having left him after leaving the train. During the evening a large white wolf came to appear very near but distances are very deceiving on the plains & as soon as M shot [at him he ran off.]"

From 1821 until 1880, when the railroad reached Santa Fe on February 9, people from all walks of life, including many emigrants, traversed the Santa Fe Trail. Although the reasons for trekking over the long, dusty Trail were varied -- trading, seeking land, or, like Phoebe, seeking love -- I believe those early pioneers all possessed something in common: the spirit of adventure. I get a sense of it every time I drive down Interstate 25, a highway that used to be little more than a dirt path, gazing at the same mountains, hills, and plains they would have seen as they sought a new life in a new land.

Michelle Shocklee is an award-winning author of The Planter's Daughter and The Widow of Rose Hill, the first two books in the historical romance series The Women of Rose Hill. Her historical novella, To Heal Thy Heart, is included in The Mail-Order Brides Collection. She's been married to her college sweetheart for more than 30 years and makes her home in Tennessee. Connect with her at www.MichelleShocklee.com.