"...The Tuskegee Airmen are to military aviation what Jackie Robinson is to major league baseball. It is surprising that many Americans, both young and old, have not heard of them."
- Military.com


The hard-scrabble Depression years were aviation’s glamour era. A public desperate for relief from day-to-day woes hung on the exploits of aviation pioneers such as Amelia Earhardt, Howard Hughes, Eddie Rickenbacker and Jimmy Doolittle.

But for young men with the wrong skin color, the dream of a career in aviation dangled beyond reach. A 1925 Army War College study concluded that “African-Americans were inherently ill-suited for combat physically and psychologically,” so black pilots were not accepted in the U.S. military. The picture was little better for those who wished to pursue commercial aviation.


Charles Anderson could find no flight instructor willing to take him. He was so determined to fly he bought his own plane and taught himself to take off and land. Impressed by his grit, German-born Ernest Buehl agreed to work with him in 1929.

Buehl recalled the battle Anderson faced. “When the government agent came [to license Anderson], he took me aside and called me everything under the sun because I would even attempt to get that man into an airplane. I finally told him, ‘I’m a foreigner. I’m a citizen by the paper. That guy’s born here.’” Charles became the first black American to receive his pilot's license and worked as a flight instructor through the 1930s.

Harold Brown grew up in rural Michigan, the son of a logger. Harold “had a love affair with an airplane. What caused it, I have no idea. It was almost as if I was born to fly.”

As a sixteen-year-old, Harold scraped together $35 for flying lessons. But he was painfully aware that a dramatic shift in attitude was needed before he could fulfill his dream. “I said, ‘By the time I'm ready, everything will change.’”


In 1939 the winds of change began to blow. Congress ordered the Air Corps to accept blacks into its Civilian Pilot Training Program (CPTP). Dozens of black men successfully completed the program.

But the Army Air Corps wasn’t interested in offering them slots. Pressure from civil rights leaders mounted. President Roosevelt made campaign promises. Historic Tuskegee Institute, a private black college founded by Dr. Booker T. Washington which had run a successful CPTP, was selected to host a new program. The effort, nicknamed the “Tuskegee Experiment,” had a stated goal to determine whether black men could succeed as military aviators. Many believed the true goal was to prove they could not.


The Airman and Mrs. Roosevelt: "You Can Fly All Right"

The program got a P.R. “lift” when Eleanor Roosevelt visited the Tuskegee campus in March, 1941. Charles Anderson, the black pilot who had taught himself to fly, now served as head of flight training for the program. Much to the secret service’s chagrin, Eleanor agreed to a half-hour flight with Anderson.


The photo op gained widespread visibility, and the First Lady leveraged personal connections to raise $175,000 to help complete building projects at the airfield. When Harold Brown graduated from high school in June 1942, the Tuskegee program awaited him.


Charles McGee grew up a preacher’s kid in the Midwest. Charles’ father, an AME pastor, instilled in him a belief that all people stand as brothers and sisters before God, regardless of skin color. An outstanding student, Charles enrolled in R.O.T.C. at the University of Illinois and participated in the Pershing Rifles, an elite drill team. He was accepted into the Tuskegee program.

The discrimination Charles had experienced growing up did not prepare him for life in the South.

“As the train left Southern Illinois, you had to change your location in the car.... You could feel the change in atmosphere....”
- Charles McGee

The segregation extended to the air base.

“Everything [on base] was black or white. They wouldn't let black officers in the white officers' club.... We went to the movie theater and they had a sign up that said, 'Blacks in the back.’”
- Tuskegee Airman Roscoe Brown

After the men graduated, the Army’s strict segregation dictated that black officers could not serve over white enlisted men. Qualified black pilots could not receive their commissions until a companion program in Illinois produced black crews and a full complement of mechanics and supporting staff. Army policy also restricted black officers to assignments in “predominately black nations.” But the need was great enough that 355 graduates of the Tuskegee program saw combat over Italy and Germany anyway. 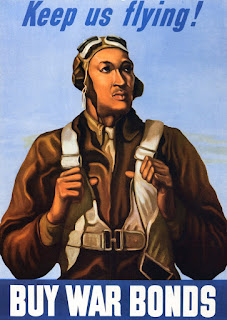 “They have a saying that excellence is the antidote to prejudice; so, once you show you can do it, some of the barriers will come down.”

The group’s record proved exemplary. They flew over 1500 missions, losing only 27 bombers they escorted, as compared with an average of 46 for other units.

Eighty-four Tuskegee Airmen lost their lives. Thirty-two were captured. Harold Brown was one of them. CBN has produced a fascinating video clip in which Brown credits God with intervening twice to save his life after his plane went down in Germany.

Charles McGee continued to serve in Korea and Viet Nam, racking up a whopping 409 combat missions. In 2011 Colonel McGee was inducted into the National Aviation Hall of Fame. Those fortunate enough to know him laud him as “an American patriot who kept the faith,” and “a man of God who loves his family.”

“Blacks have fought in every war going back to the Revolutionary War. Each time we did that, we thought that if we defended the country and did it with dignity and excellence, the broader community would end segregation. After World War II, that finally happened when in 1948, President Truman signed executive order 9981 eliminating segregation in the armed forces.”

The outstanding service the Tuskegee Airmen rendered—in spite of every obstacle—was instrumental in bringing our nation a step closer to the Biblical truth McGee’s father taught him.


God is no respecter of race. All who kneel before the Cross do so at the same level.

I stepped away from a marketing career that spanned continents to write what I love: stories of reckless faith that showcase God's hand in history. I'm so excited to see my debut novel, The Plum Blooms in Winter, launch this October from Mountain Brook Ink! Inspired by a remarkable true story from World War II's pivotal Doolittle Raid, The Plum Blooms in Winter is an American Christian Fiction Writers' Genesis Contest winner. The novel follows a captured American pilot and a bereaved Japanese prostitute who targets him for ritual revenge. For updates and related goodies, you're invited to subscribe to my newsletter HERE.

I live outside Phoenix with my husband, a third-generation airline pilot who doubles as my Chief Military Research Officer. We share our home with two all-grown-up kids and a small platoon of housecats.
Posted by Linda Thompson at 1:00 AM