Last month, I shared about the anniversary of the opening of the first public library in the United States. If you missed that post, you can read it here: http://www.hhhistory.com/2018/04/first-public-library-in-united-states.html.

Returning back to a more western setting...I've always loved cowboys, horses, and the "wild west." I've also always loved the idea of the state fairs, and I featured a snippet of both in my story for the Blue Ribbon Brides collection, Front Paige Love, only that one featured Doc Carver and his traveling stunt show with diving horses, which had its height during the late 1920's and Depression-era in the US.

From Real Life to Vaudeville Performance!

The year is 1883, and the month is May. Just 125 years ago. The inspiration began a few years earlier, though. William F. Cody was a real-life buffalo hunter, U.S. Army scout, and guide. In 1869, author Ned Buntline wrote a "dime novel" about Cody called Buffalo Bill, the King of Border Men, after the two met on a train from California to Nebraska. In December 1872, Buntline’s novel turned into a theatrical production and launched Cody's career in live performances.

After traveling and performing with notable names like Wild Bill Hickok and Texas Jack in the Buffalo Bill Connection, Cody opened "Buffalo Bill’s Wild West Show" on May 19, 1883 at Omaha, Nebraska. His partner that first season was a dentist and exhibition shooter, Dr. W.F. Carver. Cody and Carver took the show, subtitled “Rocky Mountain and Prairie Exhibition,” across the country to popular acclaim and favorable reviews, launching a genre of outdoor entertainment that thrived for three decades.

The birth of the Wild West as a successful genre was mostly a product of personality, dramatic acumen, and good timing. The golden age of outdoor shows began in the 1880s, and with his theatre experience, Buffalo Bill was already skilled in the use of the press and publicity. His fame and credibility as a westerner lent star appeal and a certain level of authenticity. Cody definitely gave the show a dramatic narrative structure. But it was the show's publicist, John Burke, who utilized innovating techniques at the time, such as celebrity endorsements, press kits, publicity stunts, op-ed articles, billboards, and product licensing, that contributed to the success and popularity of the show.

Features such as the Pony Express, the wagon train, or the attack on the stagecoach recreated specific and well-known events. Spectacles such as “cowboy fun” or the showcasing of American Indian life usually served as a prelude to a dramatic event, such as a battle scene. Skill acts such as sharp shooting (with pistol and rifle), wing shooting (with shotgun), roping, and riding not only showcased star performers, the show’s narration linked those skills to survival in the frontier West.

An orator boomed the script to the audience from an elevated platform in the arena. The circus band backed the action taking place in the arena with appropriate mood-setting music. The same skits and music later were easily adapted to film and television "Westerns." I'm sure I'm not the only one who has viewed some of those earlier westerns and considered them grossly exaggerated or quite "campy" in their presentations. (grins)

Some famous names came out of performing in Buffalo Bill's shows, or other similar ones at the time. Names like Will Rogers, Bill Picket, Buck Taylor, Annie Oakley, Calamity Jane, Texas Rose, Chief Sitting Bull, Red Cloud, and Geronimo. 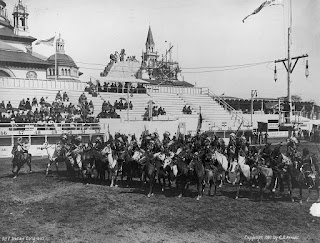 The logistics of the show were formidable. Buffalo Bill’s Wild West carried as many as five hundred cast and staff members, including twenty-five cowboys, a dozen cowgirls, and one hundred Indian men, women, and children. They all were fed three hot meals a day, cooked on twenty-foot-long ranges. The show generated its own electricity and staffed its own fire department. Performers lived in wall tents during long stands or slept in railroad sleeping cars when the show moved daily. Expenses were as high as $4,000 per day. That's equivalent to over $100,000 today!!
Circus great James A. Bailey, of Barnum & Bailey, joined Cody and Salsbury in 1895 and revolutionized their travel arrangements. The show was loaded onto two trains totaling fifty or more cars. Strings of flat cars could be linked together with ramps for loading wagons from the back forward. Besides performers and staff, the trains transported hundreds of show and draft horses and as many as thirty buffalo. The show carried grandstand seating for twenty thousand spectators along with the acres of canvas necessary to cover them. The arena itself remained open to the elements. Advance staff traveled ahead of the show to procure licenses and arrange for the ten to fifteen acres required for the show lot, preferably close to the railroad; to buy the tons of flour, meat, coffee, and other necessities; and to publicize and advertise.

In 1899, Buffalo Bill’s Wild West covered over 11,000 miles in 200 days giving 341 performances in 132 cities and towns across the United States. Most places featured a parade and two 2-hour performances. Then the whole show would be struck, loaded, and moved overnight to the next town. I remember being impressed by traveling carnivals as a little girl, admiring how quickly they would arrive in town, set up, entertain, then tear down and be gone! Buffalo Bill's show even makes these carnivals pale in comparison.

By far, the most lasting legacy of the Wild West shows is the depiction of romance and conquest, based on real people and events created and disseminated across boundaries of race, class, and geography. Western shows generated interest for Western entertainment. This is still evidenced in western films, modern rodeos, and circuses, still employing the same events and skills as cowboys did in Wild West shows. I don't know about you, but give me a good book or movie set in the "wild west," and I'm entertained for hours!

* Have you ever been to a rodeo? Ever participated in one?

* If you lived during the time Buffalo Bill's shows were touring, what part would you want to see the most? Why?

* If you were to be *part* of a wild west show, what role would you love to fulfill?

She lives with her husband and fellow author, Stuart Vaughn Stockton, along with their two children and Nova, their Shiba Inu mix, in Colorado. She has sold twenty (21) books so far and is represented by Tamela Hancock Murray of the Steve Laube Agency. You can find her on Facebook, Twitter, GoodReads, and LinkedIn.
Posted by Tiffany Amber Stockton at 1:00 AM