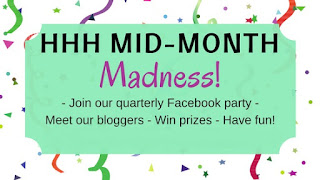 Welcome to the Mid-Month Madness Party! Seven of the Heroes, Heroines, and History (HHH) bloggers will be your hostesses. We hope you enjoy the party! It's summer so wear something fun and cool. We have sweet tea and lemonade with lots of ice and of course finger foods, brownies, and cake. So kick back and visit with us today. Feel free to ask us questions about our books, writing, or our lives. And we'd love to hear what's going on in your neck of the woods, along with what you like to read.

Scroll through all our latest releases and when you get to the bottom of the page you'll see the great giveaways for the blog party. Each author contributed to the prizes.

Be sure to leave a comment and your email address so we can let you know if you win. You can also check the side bar where we list winners. Thanks! And enjoy the party!


Avice Touchet has always dreamed of marrying for love and that love would be her best friend, Philip Greslet. She’s waited five years for him to see her as the woman she’s become but when a visiting lord arrives with secrets that could put her father in prison, Avice must consider a sacrificial marriage.

No One Is Too Tough to be Loved
Join seven Texas Rangers on the hunt for a menacing gang, who run straight into romances with women who foil their plans for both the job and their futures.
Partners in Crime by Vickie McDonough
Micah McCullough, a Texas Ranger working undercover in the Markham gang, is tasked with guarding Laurel Underwood, a silversmith, who was kidnapped to create plates for printing counterfeit money. Laurel knows she doesn’t have the expertise. Her only option is to stall and seek escape. What will the outlaws do when they learn her secret?

William and America confront evil, but will it costs them everything?

Abandoned by her faithless husband for the Dakota gold fields, rancher's daughter Elizabeth Beaumont returns to her hometown determined to prove she’s not the impetuous girl she once was. Armed with a new skill and old determination, she’s intent on making it on her own. Discovering that the new sheriff lives downstairs in the same boarding house wouldn’t be nearly so frustrating if he’d stay out of her affairs, quit calling her Betsy, and stop making her wonder if she could love again.
Garrett Wilson exchanged his deputy’s badge for a drover’s bedroll after his first attempt at law enforcement cost an innocent bystander his life. Now Wilson’s back wearing a star in a Front Range cow town, hunting an arsonist and falling for a woman who wants to know the secret behind his deepest scar. He can run again from his painful past, or he can stay and fight for the town that needs him and the woman who’s worked under his skin and into his heart.

In 1738 Jakob Hochstetler and his family arrived in America, seeking sanctuary from religious persecution in Europe and the freedom to live and worship according to their Anabaptist beliefs. Along with other members of their church, they settled in the Northkill Amish Mennonite community on the Pennsylvania frontier and built a home near Northkill Creek.

For 18 years the community lives at peace. Then, with the French and Indian War raging, the Hochstetlers’ way of life is brutally shattered. Early on the morning of September 20, 1757, their home is attacked by a party of Delaware and Shawnee warriors allied with the French. Facing certain death with his wife and children, Jakob makes a wrenching choice that will tear apart his family and change all of their lives forever.

Northkill is closely based on an inspiring true story well-known among the Amish and Mennonites. It has been documented in many publications and in contemporary accounts preserved in the Pennsylvania State Archives and in private collections.