Stands on the Natchez Trace in the 18th Century PLUS GIVEAWAY 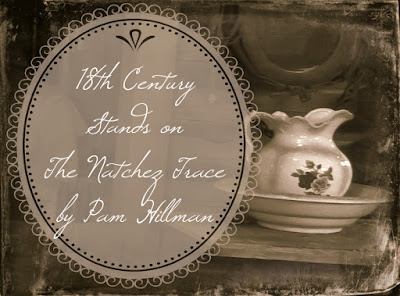 In the 1790s, there was basically one route from Natchez northward to Nashville, TN, and that was the Natchez Trace, also known as The Devil’s Backbone.

Plantation owners, statesmen, loggers, and men of all walks of life travelled down the Mississippi River to sell their products (cotton, corn, tobacco, pelts, lumber, sugar, etc.), but even that route wasn’t without its hazards (but that’s a blog for another day… when book #3 releases next year!). But heading back north was a bit trickier, and certainly more dangerous. The same folks who floated downriver either walked, rode horses, or bumped along in wagons up the trace on their way northward after selling their goods downriver in Natchez or New Orleans.

And each and every trip, they put their lives at risk. Highwaymen lay in wait on the trace to steal, kill, and dispose of unwary travelers. In light of these hazards, how did travelers protect themselves?

The most obvious protection would be to travel in a large group and with others they could trust, but that wasn’t always feasible. More than one group found themselves in the middle of nowhere among vile highwaymen pretending to be upstanding citizens.

Assuming someone could trust their traveling companions, their next goal was to start their journey bright and early each day in order to reach the next stand (or inn) by nightfall. Stands were located every 15-20 miles, and sometimes closer, but seasoned travelers learned to avoid disreputable inns.

For a price, travelers could secure food, lodging, fodder and possibly stabling for their horses. Some stands were clean, with nourishing fare, and private lodging facilities, while others were little more than pigsties and the food provided not much better than that fed to the pigs. Some stands were safe places to lodge overnight, while a traveler risked his life by closing his eyes at others.

Here are a few of the more well known (and infamous) stands along the 400 mile stretch of the Old Trace. The numbers listed give the mile marker on the modern-day Natchez Trace Parkway, starting in Tennessee, just south of Nashville.

407.7 Gordon House and Ferry Site. Built in 1818, the Gordon’s provided lodging for travelers and ran a ferry across the Duck River.

385.9 Grinder’s Stand. Along with a campground, picnic area, and ranger station, a monument honors Meriwether Lewis who died at Grinder's Stand in 1809. Over 200 years later, it is still debated whether Lewis was murdered or committed suicide.

249.6 Tockshish. Settled in 1770 by John McIntosh. When the Natchez Trace was declared a National Post Road in 1800, this stand became the midway point where post riders from Natchez and Nashville met, exchanged mail bags, and then each retraced their journey.

180.7 French Camp. Established as a stand in 1812, French Camp became a school in 1822 and there is still a school there today. Each Spring French Camp hosts a Frontier Day. Unfortunately, it was this past Saturday and I missed it. So sad! (But I have my calendar marked for 2019!)

104.5 Brashears Stand. Brashears Stand was located just northeast of present day Jackson, MS. In 1806, this stand was advertised as “a house of entertainment in the wilderness”. Brashears Stand is about 70 miles from where I live, and several historical figures who make cameo appearances in my Natchez Trace Novel series (Stephen Minor and Andrew Ellicott) are mentioned as having dealings with Turner Brashears, the man who operated this stand.

93.1 Osburn Stand. Opened in 1811, but didn't enjoy the benefits of foot travel for long as the preferred route shifted away from this site in the early 1820s.

As you can see, this is just a sampling of the stands that catered to travelers on the Natchez Trace in its heyday. Many stands came about by necessity, not because the homesteaders moved to the area with the intention of becoming hosts & hostesses to travelers. If they homesteaded close to the main road, and they just happened to be a day's travel from the last inn, travelers tended to roll in about dusk and asked to spend the night for their own safety. Sometimes, it was easier to open a stand and provide food and lodging instead of just letting travelers mill about, or worse, try to cram everyone into a one-room cabin that was already bursting at the seams with a houseful of children.

And, why, you ask, am I interested in these stands? Well, Kiera Young, the heroine in The Road to Magnolia Glen, discovers a need not long after she arrives in the colonies and opens a stand at Breeze Hill Plantation for weary travelers. It's a win-win for my heroine, the travelers, and the owners of Breeze Hill. Or is it?

Giveaway: Share today's post via social media (Facebook, Twitter, etc.) and then leave a comment letting me know you shared for a chance to win a print copy of The Promise of Breeze Hill (book #1) or The Road to Magnolia Glen (book #2) in the Natchez Trace Novel series. (Limited to US entrants only.)

Want an Additional Chance to Win? Sign up for my newsletter HERE (make sure to let me know in the comments below) and I'll throw your name in the tricorne a second time!

And the winner of her choice of either
The Promise of Breeze Hill or The Road to Magnolia Glen is ....
Jeanie (aka Mama Cat)!
Congratulations, Jeanie.

(Photos are from Landrums Homestead and Village in Laurel, MS unless otherwise noted. Pam Hillman, photographer. Landrums is not on the Natchez Trace, but is a wonderful historic village that will take you back to a more relaxing time and place.)
Posted by Pam Hillman at 12:00 AM