Thomas "Stonewall" Jackson has been a hero of mine since I was in Jr. High. So when traveling through Virginia in October, and I realized we were driving right by Lexington, we just HAD to stop. I was ecstatic to visit the only home that General Jackson ever owned, and I'm just as excited to share the pictures and tidbits with ya'll today. :D

Jackson's life is fascinating, however for the purpose of this post, we're going to focus on the ten years he lived in Lexington. After his West Point military training and service in the Mexican War, Florida, and New York, Thomas Jackson moved to Lexington to settle into his new life as a professor at the Virginia Military Institute in 1851. By this time, Jackson was 27 years old, and still unmarried. But he decided it was time to settle down, and this new home seemed the perfect place to do so.


“Lexington is the most beautiful place that I remember of having ever seen when taken in connection with the surrounding country."  ~ Letter from Jackson to his sister, 20 August 1851

This statement is remarkable, considering the amount of travel that Jackson had done up to this point between his young life and military service.

Soon, Jackson met a young woman named Ellie Junkin and he married her in 1853, however their happiness was short lived. She died in childbirth the following year, and their son was stillborn. In the midst of grief in losing his wife and son, Thomas turned to the Lord for comfort. He was a deeply sincere and religious man, which was evidenced in every area of his life.

Three years later, Thomas began his pursuit of Mary Anna Morrison. He had met her several years prior while she was visiting her sister in Lexington, and eager to start a new family, he made known his admiration of her. While they had a short courtship, their romance is one that transcends time and even their deaths.

After their wedding, Thomas and Anna purchased their home on Main Street in 1858. It was a very comfortable house, with gardens in the backyard, and Thomas loved cultivating and experimenting in said garden. He grew flowers, fruits, and vegetables, utilizing hotbeds or a cold frame to protect tender plants and extend the growing season. Above is a photo of his "scarecrow".

"His garden was a source of great pleasure to him; he worked in it a great deal with his own hands, and cultivated it in quite a scientific way...So successful was he as a gardener that he raised more vegetables than his family could consume." ~Mary Anna Jackson

The house was originally built by a jailer in 1800. Later on, it was sold to Dr. Archibald Graham. The doctor made significant additions and improvements to the house, including a second front door that opened into a sectioned-off portion of the house to operate as his office, while the other side was his personal home. This set up would turn out to be useful for Jackson as well.

Jackson was a very ritualistic person. Each morning, he would wake and ask the Lord what duties he should perform that day. He loved to walk through Lexington, waving hello to all his friends and neighbors, as he made his way to the Virginia Military Institute for his morning classes. Then he would return home for a few hours of study before returning to the college for the afternoon sessions. Jackson was also a forward-thinking man, and he had a standing desk, since he believed one would think better and be in better health if he stood instead of sitting at a desk.
"It was genuine happiness to him to have a home of his own; it was the first one he had ever possessed, and it was truly his castle." ~Mary Anna Jackson

Thomas Jackson held Bible reading and prayer in his home twice per day. Promptness was important to him. If a staff or family member was late, they would be locked out of the dining room. He even locked Anna, his wife, out one day. After that, she was sure to be on time.

When the Civil War erupted in 1861, Thomas Jackson entered the conflict and marched off to war. Mary Anna remained in Lexington, periodically making visits back to her parent's home. Anna was visiting Jackson just before his tragic accident and was with him when he passed away. They brought his body (with the exception of his left arm) back to Lexington and buried him there. After the funeral, Anna took her five-month-old daughter and moved back with her parents. She wore mourning clothes for the rest of her life, and never remarried. She became known as the "Widow of the Confederacy."

While she didn't wish to live there, Anna kept the house as a rental property until 1906, when she sold it to the Daughters of the Confederacy to serve as a community hospital. 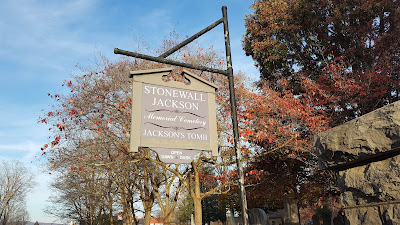 The house served as the Stonewall Jackson Memorial hospital for over fifty years before it was changed to a museum. In 1979, the house was restored to what it would have looked like when it was Thomas Jackson's 'castle'. Today it is a museum and a wonderful monument to Stonewall Jackson and his family. It was a delight to visit, so if you're ever in the area, you should make it a stop.